I thought there was a chance that no Australian would make it through to second round at the French Open this year. I shouldn’t have worried, because we’ve done reasonably well against some tricky opponents.

As everyone surely knows by now, Hewitt def Karlovic, proving that the man’s incapable of winning or losing a match in under 5 sets at a slam, Groth took down French wild card Laisne, Rogowska downed Kirilenko in straights, and with Dokic and Sam Stosur both coming through last night against Sprem and Schiavone respectively. The ‘teenage sensation’, Bernard Tomic, on the other hand, fell as expected to Kohlschreiber 61 62 62. Have I missed anyone? That’s a total of five players into the second round, let’s give ourselves a pat on the back shall we? 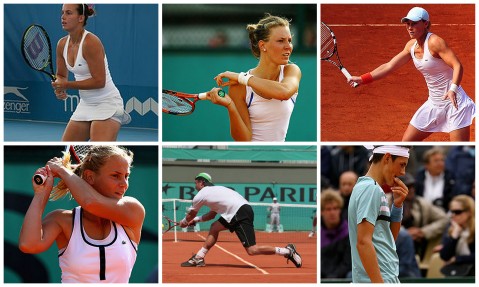 Intrigue to watch out for next round: Dokic v Dementieva, can she do it? Given that it’s Jelena Dokic we’re talking about here, I don’t see it happening. Ironically, Dokic actually leads Dementieva in their H2H 5-3.

Here are some excerpts from the presscon, it’s nice to hear Dokic sounding so positive despite all those recent dramas with her father.

Dokic on her prospects for the rest of the year:

It’s great [to be back at Roland Garros], y’know even two years ago, a year ago, I was in bed watching this tournament, so it was not easy for me and now to be back on track in the main draw and [to have] done so well and be able to play and even win my first match here was very difficult.

I usually don’t do so well in the first part of the year, the first three or four months, so for me to have won a few matches, including [at] the Australian Open, was really great.

This is probably the time that I start to do well, including the grasscourt season and then I love the American hard courts.

So considering I have nothing to defend, there is a lot to look forward to and maybe I can crack the top 50 and maybe even better.

On the upcoming match against Dementieva:

There shouldn’t be any thoughts in my head about winning it [the match against Dementieva].

If you get in a position [and] it might be close, then it’s a different story, but absolutely no pressure in that match and I’ve done a lot already by winning this match [over Sprem].”

The Australian Open first and second matches turned my career around, this [win] could turn my year around.

Meanwhile, I love how down to earth Sam Stosur is as a person. Check out Sam’s Roland Garros blog. Except posted below:

I was pleased with my win over Francesca, even though I didn’t make the best of starts out there. Even when I was three-love down I was still pretty calm about it all and I knew that I was going to be okay if I just stayed composed and started playing a little bit better.

To win that one in straight sets was a great one to get away with. I’ll gain a lot of confidence from beating someone like Schiavone because any win against a player like her is great. She is a great competitor, she fights hard and she always gives 100 per cent 100 per cent of the time and with an opponent like that it’s never over until the last point. I have a lot of respect for Francesca and to get a win over her means a lot.