In our last slam of the year, we say goodbye to two men who, each in their own way, have brought personality, flair, and charisma to the tennis court. Yet as they leave the last slam of their respective careers, it’s worth reminding ourselves what a different paths each guy has taken to reach this stage.

“Passion” was the word Fabrice chose when asked to describe his career in one word, “I love my sport. I did it in this life for so many years. I was so happy to be on the court. You can’t do it if you’re not completely in love with your sport. Can you do it for two, five, eight years maybe, but not 21.”

And 21 years of fabulousness it has been. To this day, Fabrice Santoro has lost more singles matches on the ATP tour than any other currently active player. Yet his ease on court, his cheek and playfulness, his connection with the crowd are all warmfuzzy reminders of the fact that sometimes, passion and enthusiasm touch people far more than endless but cold victory.

Ultimately in life, we can’t all be a ‘Federer’ or a ‘Sampras’, a person possessing the mind of a genius coupled with inhuman talent, but each of us can be a Fabrice Santoro, an individual who turned the career he chose into the greatest ‘passion’ of his life.

And that ain’t so bad at all.

On a road less travelled, even the shadow of Marat Safin is fast disappearing.

A friend of mine found an old 2001 Australian Open Official Program while tidying up her house this week, which she generously gave to me. It was fun flipping through it and gasping at a picture of Andy Roddick as the reigning juniors champ. But the article that caught my attention the most was a lengthy feature of Marat Safin, which focused on his phenomenal 2000 season, in particular his defeat of Sampras in the US Open final.

The article described Safin’s performance in that final as “the end of a first chapter in a story which could become one of the greatest in the game.”

Reading that line almost 9 years later, one couldn’t help but wince slightly at the tragicomedy of it all, because the “first chapter” also became the climax of whole book. A book that could’ve been a masterpiece, had the writer actually wanted to write it.

In the end, Pete Sampras got it right. When asked in the article to speculate what Safin could achieve in his career, Sampras replied, “he can be No.1 for many, many years to come. It all depends on how much he wants to do it.”

Did Marat ever want to dominate the sport? Was he ever ‘competitive’ in that particular sense of the word?

Maybe not. I won’t be the first to say that Marat Safin played against himself as much as he played his opponents. For Safin, every match was a struggle between self-affirmation and self-deprecation. Anne Lamott once wrote that “awareness is learning to keep yourself company. And then learn to be more compassionate company”.

What was lacking for Safin was precisely this awareness. He was always someone who looked critically into a mental mirror every time he stepped on court, and found that the player he actually was fell short of who he thought he could be.

Sometimes, it pays to look on your Self with compassion rather than disapproval. 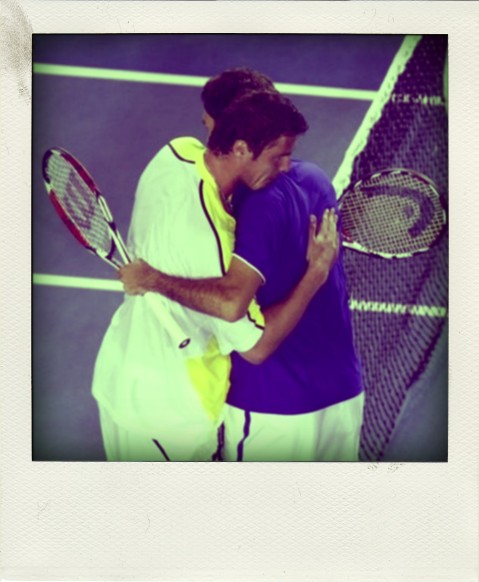 And then there’s that nagging question of whether Safin ever loved this sport.

Marat Safin stands as a testament to the fact that sometimes you can’t have it all – the talent, the love for the game, the heart, the mind and the dedication. In their mocking ways, the Tennis Gods rarely give one player the whole package.

So it’s time to say goodbye to Fabrice and Safin. Two of the most charismatic figures in the game, one full of love and wholesomeness, the other a tortured underachiever who defiantly ‘regrets nothing’ in his career, leaving much to be regretted by the rest of us tennis followers.

In to the sunset,