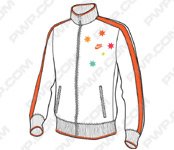 For folks in the lesser half of the world known as the Northern Hemisphere, the stars symbolise the Southern Cross, the constellation on Australia’s flag, or what was formerly known as “Spencer Street train station”.

If you’re Australian and did not recognise the stars or the song that this post title came from, perhaps it is you, and not the immigrants seeking naturalisation, who should be sitting those goddamn citizenship tests.

My politics aside, this whole “Roger gets blue and Rafa gets orange/sorbet colors” thing is getting old. But nice touch with the stars.

14 responses to “Tennis Fashion: Beneath our radiant Southern Cross”