And this will be a short entry just to keep up with Wimbly daily blogs. Middle Monday kicked off fabulously with the mother of all draws. Feddykins took Centre Court first for a match that had most of us frazzling, against old friend Jurgen Melzer. They haven’t played each other  – ever – despite being veterans of the tour. Melzer was on fire after reaching the semis of RG (as if we need any reminders that Feddy didn’t make the semis of RG *angst*). Frazzle much? Frazzle indeed.

Turned out to be a fairly straight-forward affair, and Feddy was comfortable through in less than 2 hours and in straight sets. I didn’t watch the match as I was dragged out to a movie that I promised two weeks ago. Post match, I have read articles that were slightly disdainful, saying that Feddy didn’t play well and Melzer gifted him the match.

My reaction to that is: THE HAND. Say what you want, my guy is in the quarters of Wimbly, his 25th straight quarter final, and his hair is more perfect than ever, so EFF YOU SOUR GREEN GRAPES. HAHAHAHAHHA.

Anyway, some pretty for you all, as per usual.

Obligatory Monkey photo – when there’s one, it needs to go on here!

Mirka is looking so pretty, isn’t she? As pretty as her husband. *girl crush*

On to the other peeps, I was given permission for Hewittporn if Lleyon Hewitt beats Nole Djoker in his 4R match. Rusty didn’t manage to do it, despite some dramatics of Djoker being all sicky. Well, have a consolation prize of one photo on the Picket Fence, Rusty. 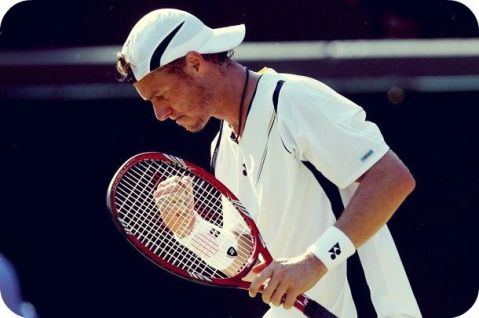 I was hoping for an A-Rod/Rusty rematch (oldies FTW). Poor Rusty. I do feel sorry for him. Guess there is still somewhat lingering affection for old Lleyton (you people will never let me live this down, I know).

But then again, so much for A-Rod anywhere. He lost to Rendy Lu, in a tight 5-setter, and thus creating the biggest shock of the men’s tournament so far (no, I don’t really see Brands defeating Kolya as any kind of epic upset). Watching/reading Roddick’s interview was heart-wrenching as I do like him as a person/player, but when I watched Rendy’s interview, I couldn’t help but feel that this guy deserves it as well.

Rendy has always played his heart out, and it means so much to him; this win, becoming part of the Wimbly club. He dedicated this win, his best result of his career, to his father, who died in 2000, and it’s hard not to go sniffly at that. Tidbit about Rendy: his dad was a chicken farmer, and he’s rather quite skilled at catching them cluckers.

I had to stick this in though, prime example of I Am A Stupid Journalist (Who Do Not Think Before I Open My Mouth):

Q. So tomorrow when you wake up, you think you’re going to be pissed off, disappointed?

ANDY RODDICK: I’m going to be thrilled. I mean, c’mon.

Seriously, dude. Do you have this organ called a brain? You do? Use it, FFS.

Other guy through is Tomas Berdych. Who plays Feddy later. No comment (OMGOMGOMG ARGHHH SDKFJSDKFJSKDFJ BERDY KILL ME NAAAAAOOOOOO).

Rafa steamrolled Paul-Henri as expected, but Bobby Sod had to dig deep to beat Daveeed Ferrer in 5 sets. In which I say, THANK YOU SODDY. I genuinely like little Daveeed, but seriously, Rafa/Ferrer QF? ZZZZZZZZZZZZZ. Don’t think Ferrer would want to risk his membership to Rafa’s Club of Minions. Poor Feli is probably such an outsider now since he’s been revoked of his club card. Rafa/Soddy should be quite electric, if the Sod we know and loathe and love shows up, instead of the rather uninspired one in the RG final. On grass, I would think Dimples have the slight advantage, but since when things worked out the way they look on paper? Bah.

Other QF match will be played between Jo-Willy and Mandy Curry. Mandy is looking really solid so far, probably the most stable of the Big 4. He’ll probably continue winning.

On the Ladies’ side, generally whatthefuckery.

Middle Monday saw a great match between old foes, Serena and Shrieky Sharaporva. Shrieky had a chance in the first set, but couldn’t capitalised and Serena snatched it, just barely. Second set was all Serena though. She broke once, and cruised all the way to the end, without any serious difficulty.

Another pair of old foes, Justine Henin and Kim Clijsters faced off, with Mummy Kimmy winning in three.

Yesterday saw the ladies’ quarters being played out – and people you’d expect to win, ergo Kimmy AND VENUS WILLIAMS (WTF VEE??), tumbled out. Vee registered her worst showing at Wimbledon since 2006, and the ever fickle media was quick to post the question of possible retirement. Vee has this to say:

Q. When you have a match like today, to what degree does it make you think about the possibility of having a limited time left in your career; that maybe this isn’t what you want to pursue all the time?

VENUS WILLIAMS: Well, why wouldn’t I want to pursue this? I’m pretty good at it most days. Today I didn’t seem to be the best tennis player, but for the most part, I rock and roll this game.

I’ll give it up when I’m just terrible. It would take more than just a few bad days in a year to make me quit tennis. So that’s not even in the equation.

You tell them, Vee. Seriously, one bad match doesn’t equals retirement. I feel sorry for the ‘Oldies’ of ATP/WTA still on top of rankings. Fail to achieve what is expected, and retirement bells are supposedly rightfully a-ringing.  I say let the players themselves decide when they want to retire. They pretty much are the only people to have a say, so the rest of the peeps can just go away.

Vee’s still in for Women’s Doubles, but her role in the Singles as been reduced to being little sis’ cheering team.

Remember how I said I’d talk more about WTA once it gets to the semis when I will sorta know the players? Well, two out of four ain’t bad. If you thought RG final was a bit of a whack, imagine this Wimbly final not featuring Serena and we have officially entered Twilight Zone for the Ladies.