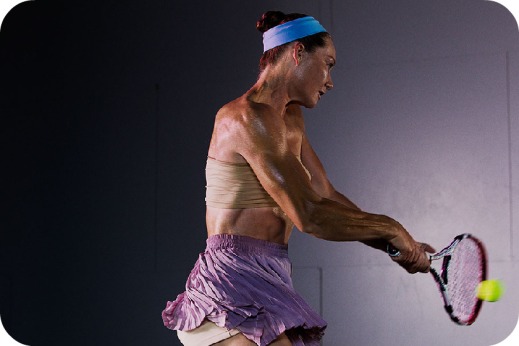 With the US Open about to commence, the New York Times ran a story titled “How Power has transformed women’s tennis” (clickey), accompanied by a slideshow and a series of videos filming the top women in ballet-inspired clothes, hitting in slow motion (clickey).

I realise I’m probably in the minority here – I didn’t like the feature. To me, it suffered from the same schizophrenia that any writing on women’s tennis in the mainstream media falls victim to these days – it laments the lack of iconic players on the WTA tour (Williams and Sharapova aside). It deplores monotony and highlights the inconsistency of the tour’s top players. It notes the growingly more prominent “missing generation” – my generation, utterly incapable of challenging Serena Williams.

And yet … despite its negativity towards women’s tennis, the piece tries to wow with the aesthetic appeal of ballet, piano music, and beautiful women in flowing, silky dresses, and ends with this conflicting statement:

People worrying about the game today will probably be the same ones, years from now, who boast about having seen Serena in her prime, along with Henin and Venus and Sharapova and Clijsters.

There’s nothing like it, they’ll say. Those were the days.

Make up your friggin mind.

And on the aesthetics – again, I think I’m in the minority when I say I’m not a big fan of the photo shoot: on the whole, there was too much hair and smoke, too little character or clarity. Besides, I fail to see anything remotedly balletic about the tennis of Vera, or Lena, or Vika or any of their other name-rhyming friends.

All this I say with one important exception – the photographs of Sam Stosur were stunning. It’s not so much that you hardly ever see the feminine side of her, so any attempt to put her in a dress inevitably wows.

No. It’s more than that.

These photos are a remarkably accurate reflection of Stosur’s character – a curious mix of power and vulnerability. Or perhaps even more accurately – power to mask vulnerability.

Trapped within her muscles and her sunnies, there’s a lot of tenderness and fear. The naturally aggressive, emotive mindset doesn’t come easily to her the way it does for – let’s say – Serena, and the simple routine of crawling out of her comfort zone each day, putting on a head to match her ironically powerful, attacking game is a challenge each of us witness Sam confront on a match-by-match basis.

Is it any wonder that she froze at Roland Garros?

Enough musings. Do you see what I see?

The rest of the photos: Lena, Vika, Vera and Kim (in that order), with a whole lotta hair.