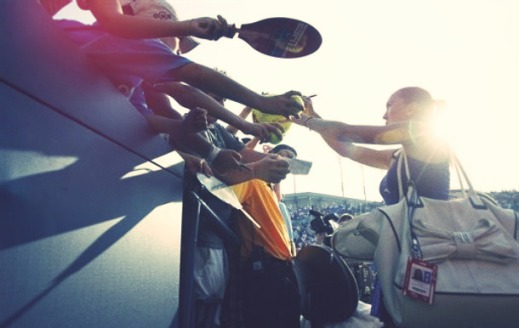 Folks – you know, it’s not great for my latent stomach ulcers to wake up at 5am in the morning to a string of expletives on my twitter feed directed at the Mighty McSmokin’. With a sinking feeling, I concluded Fed had lost the first set – the wind, the heat, a lefty he’s never played before: those are not exactly a winning combination of conditions.

As it turns out, the angst was merely directed at Federer failing to dish out baked goods.

Dear Twitter: you killed my brain cells for nothing. Does that DIS make you feel?

Not much to say on the match, which was quite literally easy and breezy. So much so that Anna Wintour grinned and accidently showed her teeth, a truly mind-boggling sight to behold.

Q. The women’s top seed is Wozniacki, also one of the youngest players. What do you make of her success?

ROGER FEDERER: I obviously haven’t seen her play so much. Definitely not as young as when Martina and Capriati and Serena all came up. They were all 15, 16, and you knew they were going to be future No. 1s in the world and win Grand Slams. That doesn’t happen so much in the women’s game, and actually in the men’s game you don’t have any teenagers in the top 100, which I think is a bit unfortunate. But games are getting more physical and more tough now. It’s just hard to kind of breakthrough sometimes, I guess. But seems like she’s doing great. She’s No. 1 seed obviously because Serena is not here, but she’s doing great in all other events, playing a full schedule. I’m sure that’s one of the reasons she’s ranked up high.

Mentioning Wozniacki, ’twas an equally breezy for the Dane, dishing out the first double bagel of the tournament against Ching Chang Chong Kai Chen Chang in just 47 minutes. The possibility that someone so adverse to ending a point could potentially leech her way to a grand slam is truly frightening.

But in a way, Mother Nature has also been fair: to give someone who looks like sunshine …

In stark contrast to Wozniacki’s ease, JJ was made to work for her 64 36 62 win over dinosaurus Lucic – the feel good story of the tournament so far. (Yes, it is a little freakish to watch someone I vaguely remember from my spelling bee primary school days.)

Q. We, in the media, are always judging the performances of all the players. Let’s switch that around. What kind of job do you think the media does? Do you think we do a great, fabulous job telling your story or do we piss you off? What do you think?

JELENA JANKOVIC: You piss me off.

Q. How much do you know about [Tipsarevic’s] game?

JELENA JANKOVIC: Can I please talk about myself?

Sensationalism. I can do it too. But in the interest of fairness, here are the rest of the quotes:

You piss me off. [laughter] I think you guys do a great job, you know, sharing the stories, you know, what we have to say, what we have done, different kind of things, interesting things. And I believe that you’re always looking for some interesting stories to write. You’re not looking for boring stuff. You’re always trying to get some things that you can write that are going to sell the papers.

Q. Did you watch Janko’s match?

JELENA JANKOVIC: I thought he played really well. It was an amazing match. Really, congratulations to him. He was just really on his game last night. He was really impressive. Really happy for him that he was able to win. It was a really good win for him. Is not easy playing Andy Roddick here on a night match, American crowd. It was really tough. But I think Janko handled it very well. He did a great job, so congrats to him.

Q. How much do you know about [Tipsarevic’s] game?

JELENA JANKOVIC: Can I please talk about myself? We go to ATP tennis, San Diego house. Guys, I’m tired. I just played a three hour match.

American tennis. With the presence of the Williams Sisters, it’s not nearly as dire as tennis in my island home. But in a way, the seeds of desperation have been sown. Just like Australia or Great Britain, the US of A is looking for a favourite son or daughter, and whoever gets past the first two rounds of a slam – be it Capra or Harrison – becomes Oudinized. With a 7-5, 2-6, 6-3 win over Aravene Rezai, Beatrice Capra felt the burden of adoration firmly on her shoulders. Yet the parallels lie not in the players, but in the nation: starved for new talent, coupled with a natural affinity for underdogs and feel-good narratives. “Belief”. “Courage”. And in the case of Capra, she turned up to her press conference with a statement tshirt reading “Serves You Right.”

In a way, it’s a story too familiar to all of us:

“Fancy that! A player ranked 367th in the world took out the 18th seed. Oh the fickleness of fortune! Just two weeks ago, Capra was sitting at home in Ellicott City having lost in the Girls’ 18 national tournament, when she got a suprise call from the USTA to play in a wild-card playoff. Now look at her!”

The formula for a Cinderella sweetheart never changes.

But before everything sours your reception of these media Cinderellas, remember this quote, and remember the indelible mark this match, this day, has made in the life of a young woman. Feel good stories are feel good for a reason.

BEATRICE CAPRA: Winning today. I’d have to say that was probably one of the best moments of my life. This whole experience has been unreal, and I’m so happy, you know, I was able to, you know, go to the player party and be a part of this. I’m really excited.

That’s all from me folks. The obligatory “Dumb reporter moment” #1:

Q. I know you’re recently married. Can you talk about how that has helped you?

Q. You’re recently married, are you not?