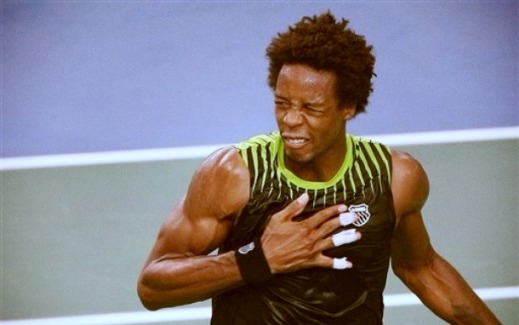 Post-loss smackdown. Read at your own risk. You have been warned by Miss Crankypants.

You know, I really, really told myself I wouldn’t care if he lost in Paris.

The truth is – I didn’t. Come on, it’s Pareeeeee. The one Masters that means abso-fucking-lutely nothing in the broad scheme of things unless your name is Marat Safin. It’s the time of the year when most of the top pros look solely to the Year End Championships and the off season.

The rat race is – for the most part – over for the year.

“So lose!” I said to Federbear, “if you win, all the better. But honestly, I’ve got you down for a loss to Melzer and a brief rest before London.”

And whadaya know? Even despite all my insistence that I won’t let him get to me this time, Roger Federer actually found a way to CAUSE MY NOSE TO BLEED nonetheless. Bravo, you fucking piece of GOAT LARD.

A distinction must be drawn here – it’s not the fact that he lost. Had Gael beat him 64 64 as he did Rafa in Doha in 2009, I would’ve been mildly annoyed, the way you’re “mildly annoyed” at a swarm of flies buzzing around your room. Nothing an Aussie can’t handle.

But NO. This isn’t about the fact that he lost, it’s the way that he lost it. I say this, having only seen the third set:

For the 4th time this year, you’ve lost a match that you had match point in. Only this time, you didn’t just have 1 match point. 2 match points. No, not even three match points.

YOU HAD FIVE, SHTINKIN’ MATCH POINTS.

You had a WHOLE MONTH OF PERFECT, ENERGIZED, POSITIVE BUILD-UP.

You won TWO MICKEY MOUSE TOURNAMENTS IN A ROW coming into this (Stockholm and Basel).

You have a record of 7 non-slam finals in a row.

You had some demon-slaying, junkyard millionaire wins to prep you.

You had an opponent who – for fuck sake – is nicknamed Monfools for a reason.

You won more points than him. But STILL managed to lose the last one.

Congratulations, you’ve outshone yourself. I hope the Mighty Babes bite your fucking ears off when they start teething. I hope Mirka squirts onion juice IN YOUR FACE.

Oh, and yes. FEDERBEAR MUST DIE.

I wrote this yesterday about Gael Monfils:

Watching Monfils play, you sometimes wonder why he needs all the acrobatics. Sure, it’s his style, he’s capable of it, but often, when you see acrobatics get in the way of a solid win, you just wonder why, WHY THE FUCK can’t you just calm down and grow up for a bit?!

Yes. I jinxed it. I should’ve known. How is this different to the US Open, in any way?

Who woulda thunk it that the ONE MATCH Monfils decides to “grow the fuck up” is this one?

To be completely fair, Monfils played well on most of the match points. He worked the crowd without his usual antics. He took Federer to 3 tiebreaks where the playing field is level and ANYTHING CAN HAPPEN and will, in fact, happen.

For someone who actually likes Gael Monfils, that’s a good sign. It shows that, contrary to popular belief, he is capable of winning a match with his brand of entertaining tennis, without resorting to stunts. It shows some degree of maturity I hadn’t given him credit for in the past. (Pity about the douchemountain of a coach.)

But … just … NOT AGAINST FEDERER BITCH. I don’t care. When you find a reason why I should be rational about this, just shoot me.

And by the way, can we stop this bullshit where every player who gets one up on a staggering Federer is depicted as some kind of Everest-moving champion. The future of tennis. The “favourite” for … umm …

Give credit where it’s due. But it ain’t a licence to ignore the reality of a match.

One last smackdown must be executed in the most brutish style. I apologize if … oh wait, I don’t apologize. Not at all. Mats Wilander, ladies and gents:

“Rafael Nadal is the heavy favourite for the Australian Open,” the Swedish great declared, before his match against South African Wayne Ferreira as part of the Champions Downunder Tournament in Sydney on Friday.

“Novak Djokovic and Andy Murray are in the mix as well.”

No shit, genius. But wait, I feel a passive-aggressive stab somewhere in that statement. Ahh, here we go:

“Roger is always a threat. It will just be a harder time for him to get to any finals now,” Wilander said.

“Who knows with Federer being able to win in Melbourne. I think it will be more about survival for him.”

A guy wins one slam, taking down a string of top 10 players.

He makes two slam quarterfinals and a slam semi, not to mention 7 non-slam finals: IN A ROW.

All this with a case of lung infection earlier in the year, and months of such obvious, public struggles to regain form, lugging twin daughters around with apparent ease, while being attacked left, right and centre by media nobodies.

And yet somehow, he still manages to finish the year as the undisputed No 2.

Name ONE player not named Nadal (a man 5 years his junior), who has managed results such as this.

Point me to a player on the ATP tour who WOULDN’T trade their best year for his worst?

Find me just ONE other sucker “struggling for survival” who has claimed more top 10 scalps since July 2010. This includes Nadal.

All this and more. And somehow, Federer’s “a threat” struggling for “survival” in this sport, while the others like Djokovic and Murray party merrily “in the mix” with the “favourite”.

Well … if this is a “case of survival”, then every other player but one on the ATP World Tour would be DEAD by now, you batshit insane piece of hypocritical asshat. Go play out your pathetic midlife crisis elsewhere.

PS. Oh Llodra. You used up the Pink Shirt magic. 😦

60 responses to “The Smackdown Partay.”