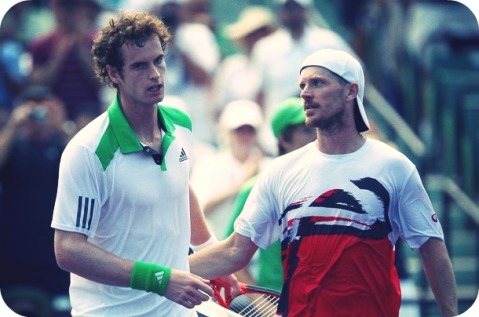 Let’s get this straight. Losing in straight sets in not just one, not even two, but THREE grand slam finals? Okay. So your balls lack a little circumference.

Losing your next match in the immediate aftermath of the Australian Open to Baghdatis? Bummer. But perhaps understandable, given Baghdatis’ relative quality as a player and the degree of post-slam blues many players experience, especially those whose dream trophies were wrestled away – kissed, bitten and spoiled by the true champion.

I might’ve even been inclined to excuse Indian Wells, given Donald Duck’s inspired performance and the increasingly visible trajectory of Murray’s 2011 (starts with “S”, rhymes with dump).

But folding like an accordion at a rock concert against Alex Bogomolov Jr – World No 118 and former hubby of the infamoose Ashley Harkleroad? It was a feat so alarmingly pitiful that I couldn’t even derive a sense of my usual petty schadenfreude from it.

Yes. I’d be facepalming if I were you too, Kim.

“I’ve played poorly last two weeks, but I was happier with the way that I competed this week than last. Confidence could have something to do with that.”

“In practice I have been competing well.” [No shit, Sherlock]

“Especially this week, chasing everything down, playing a lot of good points and feeling good, then in matches I haven’t been able to get it going at all.

“It’s happened to me in the past where I’ve had bad moments and I’ve come back well from them.”

Earlier this week, Murray unveiled his close friend and former doubles partner Dani Vallverdu as his new full-time coach. As Vallverdu happens to be – oh I dunno –  completely inexperienced and lacking authority as a coach, Murray will also continue to work with Alex Corretja on a part-time basis in an arrangement that, on its surface, seems remarkably like the Federer-Luthi “Yes Man” combo. In any case, I doubt we’ll be seeing much activity from the Murray camp until after the clay season.

On a side note, given Murray’s horrific post-Aus Open results, hands up if you’re more inclined to favourably upon Roger Federer’s early 2010 results now?

FICKLE-MINDED BITCHES. ALL OF YA.