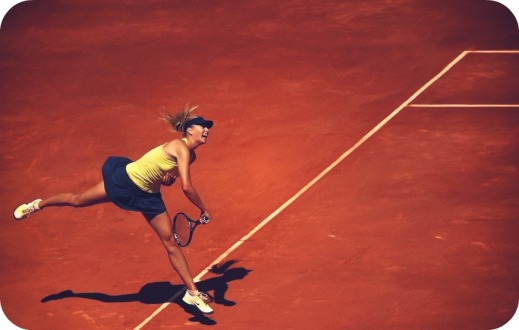 1. Clay was never his thing. But Madrid was oxymoronically a “fast” clay court, and he was playing a guy  whose first name is Flavio, ranked 149 places below him. So I’m sure you’d agree that it was perfectly reasonable to expect Andy Roddick to … yer know … win a match to start his season.

But of course, he didn’t – losing to the Italian qualifier Cipolla 6-4 6-7 (7-9) 6-3 in three hours and two minutes. This unfortunately ends a slight opportunity for Roddick to rejoin the top 10 after Madrid. Post-match, Roddick put his problem down to movement.

“There was a lot of frustration. It wasn’t a ball-striking thing, it was just a movement thing. The part where I was terrible tonight was moving forward and winning some of those awkward points.

“And once it became a battle of movement his was a lot better than mine on this stuff.”

The fact that he refers to clay as “this stuff” says something about Roddick’s affinity (or lack thereof) to the surface. But on the upside, you can’t be too disappointed if you expected nothing. 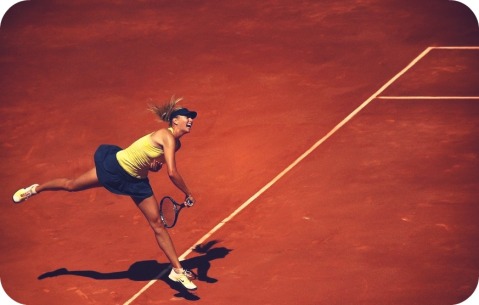 2. Two rounds, two three setters, and somehow in the last 3 years, it has been on clay where Maria Sharapova has pleasantly surprised.

Don’t get me wrong: no one would never accuse Maria Sharapova of being “graceful” or pleasant on the eyes on any surface, least of all clay. But as someone who actually appreciates the elementary crassness of her game, it was simply comforting to watch a 3 set match where Sharapova served at 77%, won 74% of her first serves, 50% of her second, and faced only one break point.

3. Franny Schiavs, who successfully kicked off in Madrid with a straight set win over Peng Shuai on Sunday, was recently interviewed by a weekly magazine “Diva and Woman” where she revealed the weapon to her tennistical success.

“For a woman, sex before a match not only is allowed, it is also fantastic. Elevates your hormones, heightens all the senses(?).” – Francesca Schiavone

4. Once again, tennistical commentary challenges the limits of human logical deduction. For some tennis commentators this week, the fact that Roger Federer decided to sign up to Rotterdam 2012 could only lead to one, inevitable, incontrovertible conclusion: Roger Federer is in decline.

In what may be an early sign of things to come, Roger Federer is changing his schedule next year to include Rotterdam in the winter. Federer, who last played Rotterdam in 2005 when he won, has always been very cautious and wise with his schedule and year-long commitments.

But with Federer adding a tournament in Rotterdam just after the Australian Open, is Federer now resigned to the fact that he may not be winning as many tournaments as he use to, which in turn also cuts down on the number of matches he plays.

So to make up for it Federer adding tournaments in anticipation if not being the player he once was?

Here I was, just innocently thinking that Federer signed up to Rotterdam 1) as a favour to an ol’ friend Richard Krajicek, 2) to fulfill his usual quota of rotating minor tournament participation each year (Estoril, Stockholm, Tokyo, you name it). But of course, esteemed people far more perceptive and analytical than me came to a different conclusion.

According to the same logic:

Such intelligent people we have in tennistical spheres. Truly.

5. I have yet to find an English version of this interview, so excuse the shoddy auto-translate-and-edit job. The Spanish ABC Sports published this interview of Wodge McFed today, and I’ve taken out a few questions because Google Translation offended me with its grammar, but the bulk of it is there:

This year, you’ve only lost to Nadal, Djokovic and Melzer. Are you happy with the results?

I don’t think they are bad. People say they are not special, but if I look back at what I’ve done, with semifinals or better results from Wimbledon ’til my loss in the Monte Carlo quarterfinals, I’ve been in a lot of good matches. It’s good news, because last year, for four months, I played just five matches going into Madrid and I didn’t feel good. I’m fine now, I have no problems and it’s been a while since I’ve felt that way. I’m happy.

How is your back?

Now there is talk of a new rivalry between Nadal and Djokovic. Do you feel excluded?

It’s more than three, honestly. The top five, with Soderling and Murray, we’re all close, we’ve all played well since Wimbledon or even earlier. Not everyone can win a tournament, only won one person can. Nadal has an impressive record since Australia, he was able to make four consecutive finals. Djokovic has a perfect record, having won everything since the Davis Cup. But I also had a terrific finish to last season, since the American summer season I’ve been playing fine. Murray may have had less brilliant results since Australia, but in Monaco he played well, and he knows how to play. And the same goes for Soderling. I think ultimately we are living a very good time in tennis.

When you’re confident things are easier. And he intends to stretch the streak to the max. Novak didn’t played in Monte Carlo, he has rested more, he played a tournament Belgrade that was easier to win than Monaco (LOL) and so he’s still confident. It will be very hard for him to win Madrid, Rome and Paris, but I also think it’ll be hard to lose that confidence even with a loss, unless he lost in the early rounds.

Nadal is defending many points. Who is the favorite to reach number one at Wimbledon?

It’s very open. All three of us have chances. I’m not defending a lot in the Grand Slams. Neither is Novak. I have more chances in Wimbledon, Rafa in France and Djokovic everywhere because he’s playing great. We shall see, it is very difficult to bet on someone. If we’re talking about who might be No 1 at the end of the year, Novak has better chances because he already has a slam and two Masters, but there’s a lot of tennis to be played. The year isn’t over.

Is No 1 still a priority for you?

Yes, it is. It’s always the goal. Nadal has to defend many points and I don’t, so I have a good chance. But I know I have to do something special and that means winning a Grand Slam. Otherwise, it will be difficult, I know.

What are you working on with your coach, Paul Anaconne?

My game, other players, strategy, what we need to practice. Many things. Trying to make me a better player. I ask, he gives me advice, tells me what I should change. I don’t pay him to tell me I’m great. He won’t or to tell me I’m the best.

What has changed in you since you became a parent?

Many things. But I’m not too fond of the word “change” because it can be understood as something negative. I’m really adapted to this new situation. I’ve spent many years doing the same things with my life, with my stuff. I’ve always found it easier to travel with Mirka. Now there are many other things to do, and to try and be the best parents for girls. It needs organization, that’s for sure, but I have a great team. Mirka does a lot of work with the girls, my parents too. They’re also very helpful. I live a very lucky life, I’m happy with the people around me.

Do the twins recognize you when they see you on TV?

Yes, they recognise me. At Indian Wells and Miami, they went to the stadium and saw me on screen, yes. That was funny.

What patterns do you see?

Not a lot, but we watch a lot of television. I’d rather they draw on a piece of paper, or play with toys, or learn things, recognize what a banana is, or a lion. I think that’s better than watching television.

Your career has been great. What’s left for you to achieve in tennis?

Nothing. Obviously I’d like to win more, but I have more than I ever imagined. If someone told me when I won my first junior Wimbledon at 16 that I would win 16 grand slams, I would’ve said it was impossible. I am content to have one, but I never thought my career might be like Becker, Edberg or Sampras, who were my heroes.

I want to experience the feeling of winning a big Davis Cup play-off in the future … I’m focused on return to number one at some point, the Olympic Games at Wimbledon … There are still many goals.