A quick tid-bit wrap of Day 7’s proceedings before we all completely descend into Day 8 as well as Federer’s pants.

For the very manly side:

1)      FINALLY, we see The Rafael Nadal Show, as Rafa made quick quick work of Croatian qualifier Antonio Veic, winning in comfortable straight sets . The Rafael Nadal Bakery also marks its official opening, with a breadstick in the first set and a bagel in the third. Oh, how has the sight of Rafa steamrolling through his opponents been missed.  And by the manner he celebrated after winning the match, it was clear that he had missed NOT struggling through his matches, too. I know that Veic is “only a qualifier” but I felt that qualifier or not, Rafa needed an easy win. 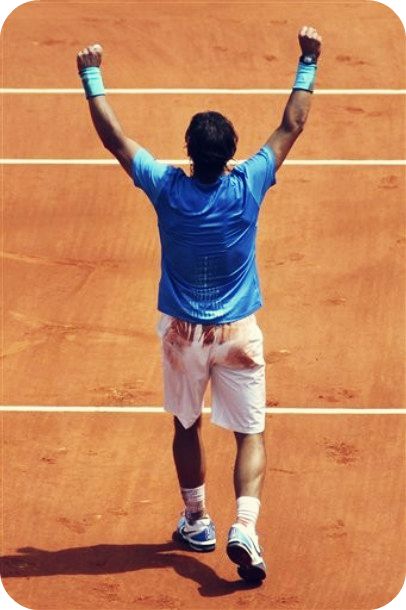 And this tidy little win should give Rafa more confidence for his future matches. Which is good to see.

2)      Del Potro failed to exorcise the all-mighty Satan Djokovic, falling in 4 sets. JMDP unfortunately came out just a little flat at the start, whereas Djokovic was all there and all pumped. The turning point of the match was when Delpo missed those two crucial break points in the third set, and from there on, Djokovic pretty much romped home with the win. All the same, I think Delpo had a pretty good run – unfortunate that he came up against Satan, if not he would have definitely gone further. If he remains healthy and injury-free, let’s just say the hard-court season later in the year will be a lot more competitive.

3)      Bad day at the office for the Ponytailed One, as Dolgopolov fell to Viktor Troicki in 4 sets, and then subsequently lost his doubles match as well. I saw the highlights of the match (owwie, painful) and I don’t quite know what to make of it. There was some superb shot-making from him, but too many drop-shots. As exquisite as your drop-shots are…if you’re using them 90% of the time, the opponent figures it out, surprise surprise.

Dolgo has the game, has the shots, and really great hair, but…mentality? He doesn’t self-implode, doesn’t raise a ruckus or lose his temper, and maybe that’s what that is missing in his game – as weird as that may sound. He’s a lot about having fun on court. Which is awesome – for someone who has hated the sport (and his father) before seriously picking it up again, nothing can be worse than making it a 9-5 office hour job. But Dolgopolov needs to get fun AND winning going at the same time, because I definitely think he has the game to win. He needs more fire and desire. Although one should consider his health problems but then again, we don’t really know how much that impedes him from playing since he never really talks about it.

For now, I’m still on the Hairbandwagon, simply because I like the guy a lot, and he’s actually quite a sweet person with a good attitude. But he needs to – I don’t know – start upping his focus and his commitment. There’s a very fine line between keeping it fun and not taking it seriously, and I don’t want him to completely tip over to the other side of the line.

4)      Toothface Murray – sweeping along with his match very smoothly until an unfortunate ankle incident resulted in him almost fainting in a heap by the net, but simply refused to give up. After strapping and icing and lots of agonised faces, Murray limped back on court. But Michael Berrer just simply couldn’t even take advantage of the fact that his opponent is half-crippled, and Murray managed to maintain his play and composure enough to win the match in straight sets. It remains to be seen how serious is the ankle injury; his match with Troicki will be a clear indication. I would hope it’s not so serious, because even though I’m not the guy’s biggest fan (har har har), nothing sucks more than going out on injury.

6)      Bobby Soddercakes – breezing through his matches eeeeaaasyyy after a slight hiccup in the first round. By the way things are looking, we are heading for a potentially very tasty quarterfinal with Sodders and Rafa.

7)      In the Matches of the Seedless – the Seedless to come through were Alejandro “Don’t Call My Name” Falla and Juan Ignacio Chela. One of these two will be in a quarterfinal…if you thought Montanes or Fab Fog in a QF is kinda BWUH, crunch on this.

1)      No more Aussies flying the flag as far as the singles go. Jarka Gajdosova found Andrea Petkovic’s moondancing a little tad too much to handle, losing in three rather competitive sets. Le sad face, but she has played well all tournament, just that she came up against the better player on the day.

3)      Kaia Kanepi was the only higher-ranked seed to not make it through; she fell to Ekaterina Makarova in straight sets. Makarova is lookin’ really good, and may have not completed her seed-slaying act yet. Elsewhere, the stage is set for Agnieszka Radwanska, Victoria Azarenka, Maria Kirilenko (who put a stop to Arantxa Rus’ run) and Petra Kvitova.

And that’s all I have for you today!