As much as I like Li Na, Asian pride and all, I really didn’t think she could overcome Shrieky Sharpova shrieking her way into the final and to her Career Slam. I thought she might give Shrieky a really tough fight, but I expected Shrieky to come through – just because, well, she’s her.

But in slightly less than two hours and in straight sets, Li Na smashed her way into the RG final, with her booming forehand and her solid groundstrokes that left Shrieky scrambling in the clay dust. It didn’t help that Maria had a pretty horrendous serving day – 10 double faults, some of them contributed to break points. If Maria was focused on getting her way into that final, then so was Li Na. Composed and showing some solid tactics and shots, not panicking/brain cramping when broken or facing breakpoints, she eventually staved off the Shrieky challenge to enter her second consecutive Grand Slam final. 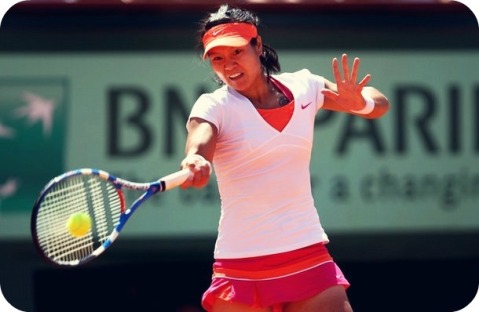 As for the other finalist – the wonderfully wacky Francesca Schiavone was too good for Marion Bartoli. Bartoli put up a good fight, but Franny – smelling her second chance at a second Slam – would not have any high-IQ Einstein spoiling her party. Franny’s one-handed backhand, although not as lethal or as beautiful as Justine Henin’s, had its own charm and does more than its fair share of damage, chopping through the Bartoli service games to take the match in comfortable straight sets.

At the beginning of the tournament, Franny and Li Na are the two least unlikely people I’d pick to be in the final, although they would be my heart’s picks for the final. I didn’t think they’ll get there. I did think Franny’s Slam last year was a beautiful, beautiful victory, but some part of me did think that’ll be her only victory. She’s ancient compared to the younger upstarts, which most of them on a good day can blast her off-court.

But Franny’s heart – one thing that we should never discount. I saw that heart in Melbourne, that amazing, wonderful spirit. She just doesn’t give up, doesn’t resign herself, doesn’t stop playing. And it’s that heart that won her the Slam last year, and brought her to the finals again this year.

Li Na, a player never known for her clay game. She humorously admitted that when she got to the quarterfinals – she didn’t think she would ever be in the semi-finals of Roland Garros. She has never really given herself a chance on clay – preferring grass and hard. Well, she proved herself to be more than okay on clay with her impressive run to the finals.

1.3 billion people supporting you. That’s some pretty impressive support, and at the same time, a heck lot of pressure. Still, she’s in and she has a chance. A great great chance.

With all the young upstarts in the women’s tour – the bets were with the likes of Kangaroo Woz, Vika Azarenka and co. But playing the finals today are two women considered ancient – Li Na is 29 years old, and Franny is turning 31 years old. No one would have really given them the odds at the start (me included, as said). But here they are today.

This is one final where I don’t really have a preference as to who to win. I just hope to see a fantastic tennis match with Franny and Li Na giving their all. Both ladies will hopefully provide a stunning final, and may the best lady with the best game win today.

Whoever wins, it will be a beautiful story, of where your heart and your determination could get you, to achieve your wildest dreams. And that nothing is impossible.

Good luck for the finals, ladies!