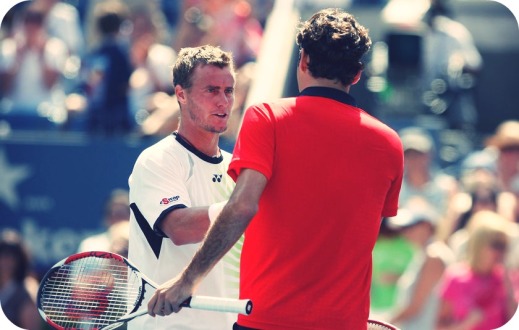 I’ve been thinking a lot about how our opinions of a player may change over the course of their career, about giving second chances and keeping an open mind. There was a time when I hated Roger, hated Hewitt, and hated their entire generation for their polarising personalities and odd mishmash of mutant styles.

Thankfully, that time has come to pass.

There is a tendency these days to see every age as the Golden Age, a vastly superior model of the previous age. Progress. The inevitable march to sporting perfection. Sport may be about history and identity, but sports coverage is all about creating the “right now”.

And partly as a result of this, Federer’s generation has copped more than its fair share of total bollocks and discredit, from the “weak era” theory to the disregard for players like Roddick,  Hewitt and sometimes Roger himself.

Nowhere was this more evident than in this question asked during Roger’s press conference:

“Do you welcome the Australians having a tennis player for a change after their great heritage?”

Let’s get the facts straight here:

1) We “have tennis players”. Even in our worst era of tennis performance, the last Australian to make a grand slam final was Sam Stosur in 2010, oh yeah! That would be LAST YEAR.

2) Yes, Bernard Tomic is clearly a talent and one of the youngest players in history to be in the quarterfinals of Wimbledon. This is partly to his credit as a maturing player who has vastly improved his movement on court, but also partly as a result of a draw, of a subpar and ill Soderling, of … well, Xavier Malisse.

And 3) the question ignores the fact that Lleyon Hewitt – remember him? – is part of the “great heritage” of Australian tennis.

Roger, of course, picked up on this very quickly.

You talk like Lleyton isn’t around anymore. Be careful.

(He) could have beaten Soderling. We’d be talking differently. For me, he still remains a great champion, always will be.

He almost seems a bit injured to me I’m sure he’s never going to say what was actually the problem with him. But he can really battle through, you know, I think tough moments. That’s why I admire, you know, him as a player and his work ethic.

But I wonder just how much Roger was thinking of himself when he said “you talk like Lleyton isn’t around anymore. Be careful.”