I decidedly didn’t watch any matches other than the 10min of Fat Dave during breakfast today. This whole time difference thing kinda sucks and everything has been pulled off Youtube so no match highlights other than the 30 secs that the US Open website offers us. Seriously it’s 2011 and we’re still fighting against media totalitarianism, its bloody ridiculous…but anyway, enough about my plight, here’s my wrap of the day that I just made up from tweets and whatnot. I could be completely wrong, but it’ll hopefully be entertainingly wrong. 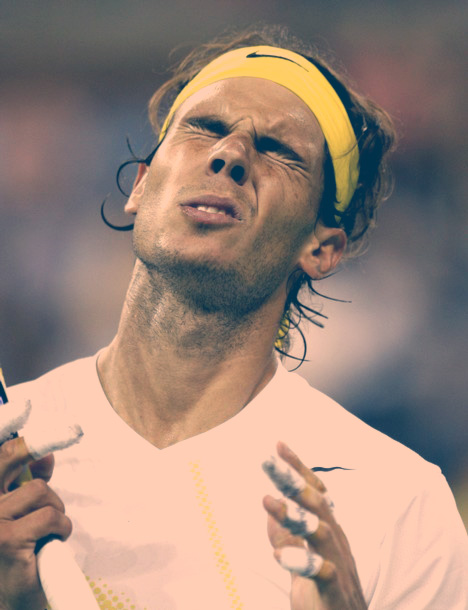 Let’s start with Rafa…W…T…f? really?  I believe Rafa is just trolling us with this inability to play like the Rafa of old, these days. I always think Rafa is gonna unveil himself at the end of some tournament and go...”Aha, I was playing you all for fools, no? I can actually play as Rafa but I was getting tired of steamrolling punks so I thought I’d just play shit for the lols.” =]

Golubev was up 7 set points in the 2nd and had a break in the 3rd but still came out a loser in 3 sets.  I think Rafa just likes dangling the cheese in front of mice and pulling the string at the last minute.  And Golubev helped him by fucking up shot selection on every important point.

Rafa’s next foe will be Nico Mahut who dished a yummy bagel in the 5th set today.

A spate of retirements also hit the mens side today with Djokovic, Ilhan and Chela benifiting.

James Blake made it in 4, so did Fat Dave, who was spraying errors left right and center until about the 3rd set but managed to hold out his Fat Daveness enough to win. Similarly Ferrer, Nando and Stan the Man all overcame sluggish starts to move into the 2nd round in 4 sets also.

Donald Young sets up a 2nd round encounter with Stan the Man after a straight sets win over Lukas Lacko. His first at the USO since 2007. Much has been written about Young, about his uber-awesomeness in the juniors, his parental coachfails and his lack of propensity to win 1st round matches in anything despite the number of wildcards he’s been given.

Now it’s easy to hate his cockiness but if any of you have managed to catch the very good Jim Courier funded doco called Unstrung about the journey of tennis juniors in the US, you’d realise how frustrating it must have been for Young. He was regularly beating 18 yr olds at 15, and having long been touted as the next big thing in American tennis, he has fallen short at every step, but the kid has game, and I hope he gets his breakthrough one day.

Gulbis created the biggest upset on the men’s side, taking out Youzhny in 3. Billed as the battle of the headcases, I guess Gulbis was just way less headcasey today.

2nd major upset in the womens side in as many days with 6th seed  Li Na falling in straights to Simona Halep. *sigh*, WTA….*sigh*.

Like COME ON, Steffi won like 20+ slams, I don’t expect that kind of consistency but I expect my top 10, reigning slam champs to at least make the 2nd round of a slam…FFS!!!!

Li’s compatriot Zheng Jie thankfully battled it through in 3, likewise with Franny “I always take 3 sets to find my range” Schiavone.

Everyone else (Serena etc),  took it hunky dory and a special mention goes to Jelena Dokic for making it to a 2nd round of a slam, you’re doing better than some others, dudette.

That’s it from me, for those peeps in timezones actually able to watch the Open please feel free to tweet match reactions at me.