Remember a month ago when there was crazy in the Montreal water and everyone was making fun of Canada? Well, the crazy just slipped through the borders and the customs and snuck into the New York water.

The day started off relatively normally, with expected wins for Vera Zvonareva and big guy Del Potro, with a mild upset at Armstrong with Lucie Safarova losing to Monica Niculescu. And then the crazy – crazier than Crazy Ponytail crazy – began.

Talk about waking up to OMFGWTFBBQWHUT. Even if I did expect Flavs to be tricky for Shrieky, I certainly did not expect Shrieky to lose it. Coming into USO, she’s in solid form and looks like one of the firm favourites to go far – or win the title, even. But nooo. Flavs started out strong to blaze past Masha, and but in true Shrieky fashion to claw, dig and plain refuses to give the fuck up, she fought back to force a decider. I bet no one thought she would lose when she came back from 1-4 down in the final set.  She has won all twelve three-setters that she has played this year, and it seemed inevitable that this was going to go to thirteen. But unfortunately, ugly double-faults and errors crept into Shrieky’s game when it really mattered, and Flavs smacked a backhand winner to win the match.

Now the only people that I really want to win are Serena or Sam Stosur. Stosur won’t do it, so it’s all up to you, Serena.

Dear Stan-not-so-Man, you beat Andy Murray last year and you lost to Donald Duck – in the second round – THIS year? *FACEPALM* I mean, why the fuck are you even in a five-set tussle with him to begin with?

I only saw a bit of the final set – and Ewok was unable to consolidate breaks TWICE against the Duck, and played a craptastic tiebreaker of total FAIL to lose the match. Jedi Ewok, you are not.

I can be totally mean and blame LJ for this – for she reckons that Donald Duck should have a time of reckoning in his career…but honestly, Stan was just being lame. I supposed I should (grudgingly) give Duck the credit for hanging in there but I’m just kinda irrationally all ARGHHHHH at Stan (I wanted that Murray/Wawa rematch – I WANTS it).

Am taking extra shoes to Sydney so I can throw them at him. Anyone wanting their shoe to land on Ewok’s scruffy face, post it my way.

OH MY GOD. I went running and then breakfast with my training mates and completely missed this match. Why did I think exercise and food is important!??! I shoulda just stayed home, get fat and be in absolute hysterics over this comedy of a tennis match, that apparently rivalled the sheer hilarity of the Nadal/Verdasco match at Cincinnati. I mean, there were 16 breaks of service. SIXTEEN, and FIVE in that last set.

MAndy started out sluggish and passive, seemingly unable to find his rhythm and serving like a noodle for most of the first two sets. Haase, however, was swaggering with confidence, finding his range and shots to go up two-sets to love, and a major upset seemed to be brewing. But MAndy was no stranger to coming back from two-sets down, and as he found his groove, Haase began to self-destruct, losing the next two sets in outrageously bad fashion.

Yeah, now we know why you choked…I mean, if you’re going to start stuffing tennis balls into your mouth…

It seemed to be all over for Haase when MAndy broke him twice to go up 4-1 in the decider…and…AND…MANDY THEN FARTED THE DOUBLE BREAK. HE DID. And it was 4-all and my Twitter TL was like LOL WHUT WTF CRAAAY BIPOLAR INSANE MAD RETARDED MUHAHHAHA…and THEN…HAASE GOT BROKEN.

AND THEN, MANDY FACED BREAKPOINT WHEN HE WAS SERVING FOR THE MATCH.

See above reaction times a thousand.

I was actually hoping for him to lose serve so that my Twitter TL can further entertain me, but their brains were not meant to be completely broken as MAndy hung on to serve it out. 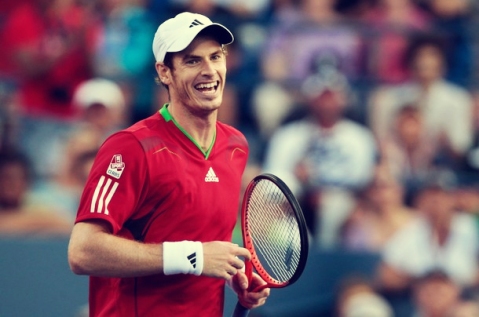 MAndy SMILED. How was THAT for crazy cray cray??

In also relatively crazy but not so much fashion, Jurgen Melzer lost to Igor Kunitsyn in five-sets. After a breakthrough season last year, Melzer has decided to go back to sucking, so whatevs, dude. For matches of normalcy, Rafa beat Mahoooo after the latter retired mid-way through the second set, so much for pulling off a John-Isner-at-RG. Fat Dave turned fit to win the Oldies’ Battle, beating Papa Ljubs in four sets.
outine wins for USA-ians A-Rod – who beat the socks off Jack Sock – and John Isner, as well as Alex Bogomolov Jr. James Blake, however, fell to Lord Farquaad. Other men through: Julien Benneteau, Florian Mayer, Feli Lopez (who didn’t have it easy, facing mucho resistance from a spirited Vasek Pospisil), Skinny Legs Simon and Juan Ignacio Chela.

As for the women – Julia Goerges was ousted by Last Chinese Standing Peng Shuai, and Sammy Stosur battled past Nadia Petrova after wasting one MP in the second set. Kirilenko and Lisicki also made it through.

And that’s it for Day 6. Let’s hope for NO CRAZY in the water today, especially where Pants (and my bunch of pretty oldies and crazy young-ie) is concerned.

See you again for Day 7 wrap.