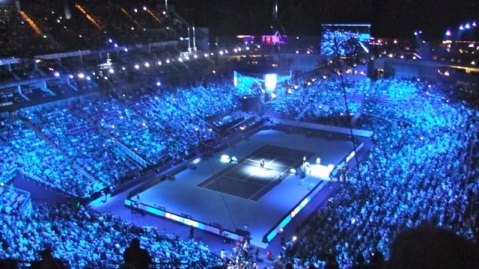 In another life, I had decided to write a long post about the World Tour Finals tournament in London in general – the venue, the crowd, the atmosphere, the matches I had seen. But in that other life, Federer v Nadal had yet to materialise before my now very privileged eyeballs, and of course, everything changed after that.

They say a picture paints a thousand words, so I hope to sum up – in a single GIF – my experience sitting through a Fedal match last night:

The day started in a rather ordinary fashion with Tsonga v Poisson in the afternoon session. It was my third day at the tournament, but the novelty of attending the World Tour Finals still hadn’t worn off. I still remember my first reaction upon sighting the O2 Arena –  “err … it’s finished, right?” I DUNNO OKAY?! IT DOESN’T LOOK … DONE.

But done it was, and done so well.

In a bizarre way, the O2 Arena was everything the US Open venue should’ve been had the Americans been more people-minded and less focused on size with their stadium design. 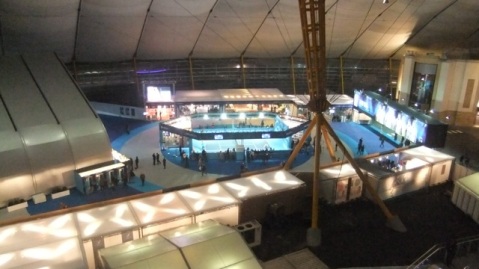 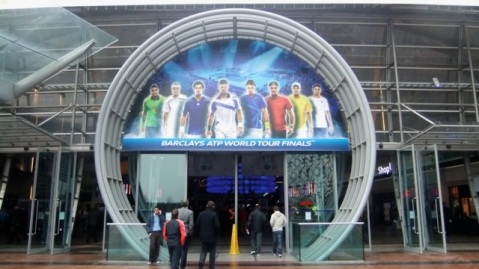 I saw way too many people take photos with this pole. AND THEN I FELT LIKE A PROUD MAMA 'cause it was like MY POLE. Okay?!

Indeed, despite the location, the O2 Arena has a bizarrely “American” feel to it. Packed with restaurant chains, Starbucks, a cinema, a fanzone where fans could watch players practise even without a ticket, the O2 is like a two-in-one event venue and mall where tennis fans could eat, drink, play and spectate without being stranded in the middle of fucking nowhere and 50 miles away from the nearest supplier of alcohol and/or caffeine. 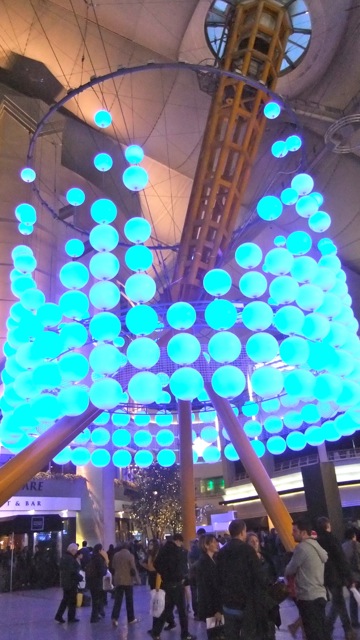 But of course, most of them come to see the tennis, and last night, they counted their lucky stars and came to witness a match-up occurring at a rarer frequency these days than ever before – Fedal.

There is an inclination in tennistical circles to confuse a “long match” with a “epic match”, and a “short match” with … let’s say – a “meaningless match”. But I am of the opinion that in a democratic society, one should always listen to the masses.

Having sat through 2.5 days of slugfest tennis, by the time I got to Fedal, it was the first time I felt the O2 Arena positively gyrate with the energy of a large crowd wetting themselves in excitement. And where the match lacked in competitiveness, it made up for with the pure … whateverthefuckthatwas that Federer put on display last night.

At last, no more slugfests and tedious baseline rallies, no need for third set tiebreaks and desperate chokes that do no justice to the match … despite the scoreline, it was a highly entertaining affair for all (except for the die-hard Nadal fans). You know Federer is tennistically entering the fourth dimension when sections of the crowd starts laughing and groaning at his shots like actors in a soft porn movie. At some point towards the end of the first set, a guy sitting next to me called out “Oh STOPITT ROGER!” as Federer cooly drilled a forehand down the line – on the run – and oil sprung up from beneath the earth’s crust where the shot landed.

Oh boy did I need a cold shower. Preferably with Roger in it. 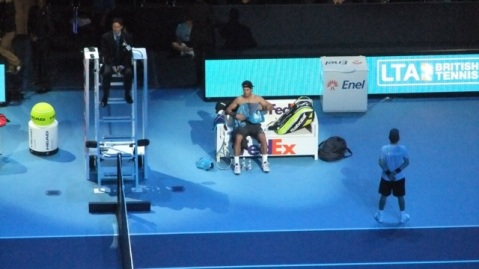 Nadal shirt change - for the 1 and a half Rafa fans that lurk around here. This is my method of consolation.

But it was all over too quickly, and perhaps mercifully for Nadal. As the song goes, caught in a landslide, no escape from reality.

While one win here and there hardly changes the overall dynamics of the Fedal H2H, last night did serve to emphasise the obvious role of surface advantage in the Federer v Nadal rivalry: a 4-0 win/loss record for the pair on this surface is no longer just a stat – it becomes a pattern. In a way, this underscores how hard Nadal has had to work on surfaces that Federer is inherently good at, and how in turn, Federer’s own clay credentials have been largely overshadowed by his singular inability to beat Rafa on that surface. For 2011 at least, indoor hard courts remain Federer’s last bastion of defence for various reasons relating both to style and longevity.

Given the lopsided scoreline, there will of course be discussions of what Rafa did wrong, or more infuriatingly – what wrongs his body did to him. But a one-sided match such as this can also mean something quite different: that occasionally, a player in his element, on a surface favourable to his game, with a mind hungry for victory, can come up with something truly awe inspiring. Nadal did it at Roland Garros 2008, and what Roger Federer did on court yesterday was nothing short of unplayable.

And for that whole hour when I sat inside the O2 Arena, with my mind flooded by endorphins, I felt truly privileged to have seen it all and felt it live.

Since leaving in August on this trip, there have been such a lot of world to see and so many amazing individuals along the way to meet. But knowing my greatest addictions in my life, you had to leave it up to Federer to put that glazed cherry on twop.

14 responses to “Report from Abroad: Rhapsody.”