Oh gee whiz. This preview seems so effing familiar. Is it because I’ve done it before? AND before? This is the third semi-final preview post I’ve done featuring the same four dudes, albeit different match-ups.

Anyway, I’m a big ol’ bubbling pot of emotions and anxiety and excitement, accompanied with ulcers, nausea and all of that, so if this doesn’t make an iota of sense, forgive me. 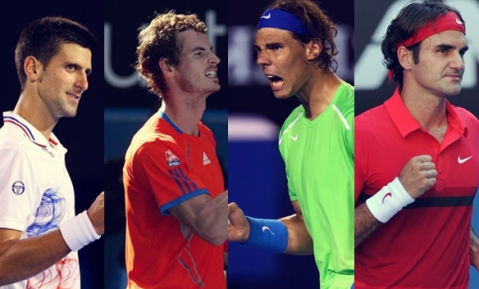 OMGOMGFRAZZLEPANTSWTFBBQOMG  I CAN’T TAKE THIS. And in a way, I really can’t.

Why I think Federer will beat Nadal:

1)      Federer seems to be in better form. If he serves well, returns well, play like he did against Tomic and Delpony, his chances are more than just realistic. Simply put, he has to take his opportunities and make full use of them, because Rafa is not going to give up many of those opportunities.
2)      It’s not clay. I like his chances better when it’s not clay.
3)      He should have some confidence based on their last meeting at WTF – even if it’s a different court, different scenario and different things on the line.
4)      I think the old man still has something to prove…to himself, most of all. I have no doubt he will give his all, and may his all be enough.
5)      Rafa is struck by The Curse of Australia Day. Fireworks do not like him.
6)      Because, as usual, my heart says Federer. It always always ALWAYS says Federer.

Why I think Nadal will beat Federer:

1)      Duh.
2)      By duh, I mean Federer’s propensity to brainfart to epic proportions when playing Nadal. See Miami 2011, RG 2011. Especially in RG when Fed’s been the better player all tournament – turning in the most fantastic performance of the year to boot Djokovic – and yet he fell to Rafa in the final, after essentially farting away the massive first-set lead. UGH UGH UGH to the MAX.
3)      Nadal has beaten Federer in Australia. But not vice versa. In other words, Nadal knows how to beat Federer in Australia.
4)      The Curse of Australia Day may work along the theory of Something’s Gotta Give.
5)      In the words of Steve Tignor: History shows that whenever Federer plays Nadal, Nadal wins.

As for the Djokovic-Murray semi…

Why I think Djokovic will beat Murray:

1)      Djokovic has beaten Murray in a Slam – the same Slam – in a final.
2)      He will be keen to repeat his year of 2011. That’s gotta provide extra drive and volley for him to power through Muzzface.
3)      Ranking suggests it.
4)      Djokovic has proven in that he can outrun Hewitt (although half-crippled) and most ofall, Ferrer. He can certainly outrun Murray.
5)      Muzz has not been challenged (except for Harrison) and need not play his best tennis thus far, and may find Djokovic too suddenly challenging. Djokovic got that kink out of the way with old man Hewitt unexpectedly pushing him.
6)      Confidence wise, I think Djokovic’s got it more than Muzz.

Why I think Murray will beat Djokovic:

1)      Mr.Lendl in his corner. I think that’s a huge positive for Muzz and may help him greatly as far as the mental side goes.
2)      If a half-crippled Hewitt can take a set off Djokovic, Muzz has got to fancy his chances of taking three sets.
3)      It’s not a final. He’s less likely to choke and implode mentally.
4)      Point 5 for Djokovic may also work in Muzz’ favour.  The lack of challenge so far means he has yet to peak and may peak and pull off this big feat in the semis.
5)      He’s the only one in the Top 4 without a Slam. You think he’d want a chance to rectify that? YA THINK?? (déjà vu)

I’ve said my piece, essentially. May the best men win.

One response to “AO2012 Men’s Semi-finals Preview: Here they are again. (by PJ)”