And thus ends the first Grand Slam of the year. The guy with the trophy is Novak Djokovic and the guy with the plate is Rafael Nadal. And as we sit back and watch, the tennis media/world explodes with excitement at the new GOAT…

(I just want to interject here and say that I’ve never really believed in the GOAT debate. GOATS, to me, are these. Other than that, I feel that the eras/surfaces/players/competition – all too vastly different to arrive at one single absolute conclusion. But I disgress.)

Anyway, some post final thoughts to wrap up the dizzying explosion of tennis, tears, dramas, sweat and sunburn…

AO2012 final – a replay of the AO2009 final. Replace Federer with Nadal, and replace Nadal with Djokovic. The one who came off a gruelling semi-final defied the odds of physicality and fitness to win. The one supposedly more well-rested, the one with the supposed advantage…lost – not because of a lack of skill or talent, but to that mental demon floating around the head.

Rafa had all the chances and the momentum. Crawled back from a 0-40 hole in the 4th set, dug deep to win the tiebreaker, was up a break to lead 4-2 in the fifth. But then when Djokovic found that extra something, Rafa lost that extra something. When Djokovic broke back in the 5th, that was when the doubt crept into Rafa’s head. And mentally, that was that one hurdle, a magnanimous one, that gave Djokovic the ultimate advantage. The same advantage that Rafa had over Federer in the 2009 final (and in all their finals/meetings, I may add). 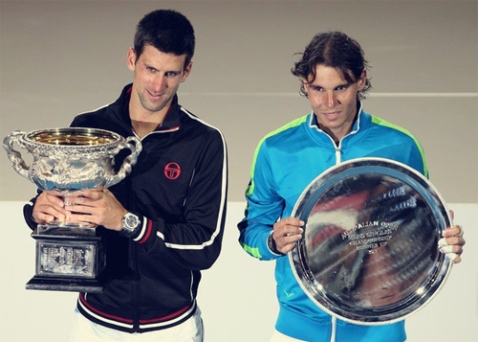 Rafa’s post-match conference spoke a lot of positivity, as did Murray’s post-match conference. These two guys have lost absolute heartbreakers, but to arguably the best player of the moment right now. Murray will move on – I have no doubt – and I feel that he will be a force to be reckoned with for the rest of the season. He’s at a good place, despite the loss.

Rafa? There is a lot of discussion and debate surrounding his mental state with this 7th-straight loss. As a Federer fan, who has watched Federer suffer and struggle at the hands of Rafa, believe me when I say that I know how Rafa fans feel. It’s frustrating and annoying to see your guy lose to that one other guy on a constant basis, and no matter what Rafa (and Federer) may have to say about it, we just know that it’s mental. Of course it’s not 100% mental but can we really deny that the block in both their brains against their respective conquerors had to do with the losses sustained over and over again?

I’m not entirely sure that Federer will ever solve the Rafa riddle. As LJ had noted in one of her tweets, tennis is a game of match-ups sometimes, and the match-up between the Federer-Nadal game gives Rafa the bigger edge, not to mention that mental advantage. Of course, the old man may still find a way now and then – I won’t ever count him out – but I’m pretty sure he’ll end his career with that deficit H2H to Rafa.

As for Rafa…he finds himself on the undesirable end of this rivalry with Djokovic. What had hurt Federer – game wise – will not hurt Djokovic. It will be back to the drawing board for him, and he will have to figure out Djokovic in a way that he never needed to figure out anyone else. It will be a challenge for him, but I’m sure that he will rise to the occasion. I’m not ready to write him off as the eternal loser in this rivalry. Because we all know that isn’t set in stone, not yet.

Roland Garros will be very interesting, especially if Rafa and Djokovic happens to meet again. As the best clay courter the tennis world has ever seen, Rafa will have the edge. And beating Djokovic on his beloved Parisian clay may be what Rafa needs to boost his confidence once again. Although if I can be selfish, I am, of course, rooting for a certain pair of Grandpa Pants to spoil the potential of a Rafa/Djokovic final.

I think I’m approaching that zen point of Federer’s defeats – to Rafa, or otherwise. Yes, the losses still hurt. Yes, they still make me feel like crap. But I think the time it takes for me to get over it has lessened gradually. At the end of it, I’m just glad I still get to see him play.  I’m glad that he’s still around. After all, I’m not a Federer fan because he wins (in fact I kinda loathed him when he was all dominant and winning everything circa 2004-2006). I’m a Federer fan because he embodies what I admire in a sportsperson – the determination, the spirit, the passion he has for the game. Because he plays a friggin’ beautiful game of tennis, and because his pants are friggin’ hot. Everyone loves a winner, but strangely enough, I became a bigger Federer fan than I was when he was at the losing end (Wimbledon 2008) because then you see what kind of stuff that he’s truly made of.

Rafa fans, you have a lot to be proud of when it comes to your man. Even if he doesn’t figure out the Djokovic riddle (but I doubt this), he’s never a loser. His willingness to fight, his never-giving up spirit, and the fact that he always leaves it all on the court, each and every time – that speaks volumes about him as a person.

I think the level of men’s tennis is at dizzying heights right now. The Top 4 is probably the strongest Top 4 we’ve seen in recent years. It will be interesting to see if any outsiders can wrestle their way into this circle. This sets up for a very intriguing 2012 season…even if I may encounter heartbreaks and heartaches along the way, I’m excited to see all of this unfolding. 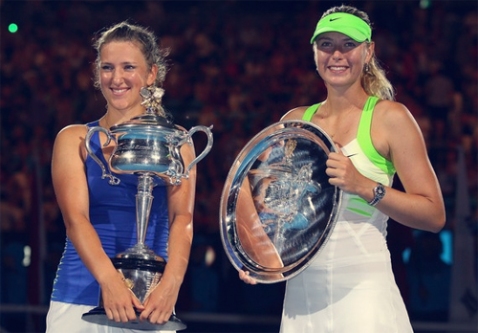 As for the ladies’ side…they have a new #1 – Victoria Azarenka, who captured the spot by winning Australian Open and blasting Shrieky Sharapova off court with a bagel. Ladies’ tennis looks as exciting as the men’s and even less predictable. The last 4 Slams are all won by first time Slam winners – 2 young ‘uns (Kvitova and Azarenka) and 2 oldies (Li Na and Stosur). Will this trend continue throughout 2012? Not if Serena Williams has anything to say about it. Her Australian Open campaign is not successful according to her lofty standards, but she’s back, and back with a vengeance.

This year’s Australian Open has been good for me. I was a cover girl as a tennis tragic who visited online tennis forums. I got to cover an adidas event and see Tsonga, Woznicaki and Simon up-close. I’ve written a lot more about tennis than I ever had in the past. Most importantly, I saw a lot of great matches, saw a lot of 5-setters, saw the players grind it out, saw Federer playing some wonderfully fantastic and pretty tennis, saw the heart and soul and guts of Lleyton Hewitt. The results wasn’t what I wanted, but that isn’t something I’ll dwell on when I think about my experiences at the Happy Slam this year.

And thus this concludes my guest bloggage for Australian Open. I’ve been rambly and most of the time not making a lot of sense, but it’s been a LOT of fun, as usual. Thanks again to dear Dootsiez for letting me occupy this spot on the fence.

And now back to you!