Frankly, I blame the ad board.

So you’re in a bad mood at work. You’ve been asked to stay back for 3 days in a row and work overtime by your boss without any prior notice or monetary compensation. To top it all off, the project you’ve just been working on hasn’t been going according to plan.

After spending an hour on a frustrating phone call, you’ve finally had enough. You get up off your chair and throw you phone against a wall. You managed to miss the wall, but didn’t manage to miss a poor contractor in your office, whose head starts bleeding immediately. Because, ya know … that’s generally what happens when human flesh comes into contact with harsh, sharp objects travelling at high velocity.

You apologize to the contractor, but immediately starts accusing your boss of giving you too much work. “I’m so terribly sorry”, you say, “I really didn’t mean to injure you with a flying telephone, I was really only intending to lightly damage workplace property.”

“Besides,” you continue on, digging a whole and squishing your belly into it, “it’s all Mr Boss Man’s fault he gave me so much work. I’m allowed to throw a violent tantrum at work every now and then. It’s so hard to have a well-paying, globe-trotting career while performing under pressure. How was I supposed to know that everything within my job description would actually be true?!” 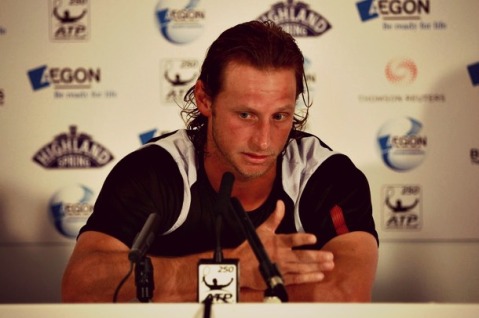 In any industry, for any kind of job, this kind of behaviour would warrant immediate dismissal. Any except – it seems – professional tennis.

In the Queens final yesterday against Marin Cilic, David Nalbandian was left kicking himself (YOU SEE WHAT I DID THERE?!) after he was defaulted from the match for injury a lines person.

One thing that really annoyed me about the commentary in the above video: I simply don’t understand how anyone could watch a replay of the incident and conclude that Nalbandian was ‘unlucky’.

Oh I geddit. He didn’t mean to injure the linesperson. He only meant to give an ad board a good kick just because thing weren’t going his way.

And I didn’t mean to punch you in the face, I only meant to punch the air, and well – how “unlucky” for you – YOUR FACE was in the way.

David Nalbandian might have unintentionally injured a linesperson, but make no mistake about it – he fully intended to throw a tantrum.

Watching Djokovic smash a sponsorship sign on a chair at the French Open last week, I found myself wondering how we had come to this – from excusing players for shrieks, fistpumps on court to smashing racquets a la Baghdatis. And now to wilfully damaging tournament signs. But hey, at least the chair Djokovic aimed at was empty. It didn’t have an old man sitting behind it.

To make matters worse, Nalbandian’s immediate response to the situation was a thinly veiled attempt at blame shifting, in a “I’m sorry I injured you, but in my defence, the ATP SUCKS” kind of way.

This incident comes after Nalbandian was fined $8,000 for throwing water at a staff member following his five-set loss to John Isner at the Australian Open this year.

How does this not call for a proper suspension at the very least?

8 responses to “Frankly, I blame the ad board.”