I remember Federer taking a medical time out just twice in his career. The first time was in the 2005 Australian Open semifinal against Marat Safin. The second time happened in Shanghai in 2008, against Andy Murray in their final round robin.

Unsurprisingly, Federer lost both of those matches. This is a man who keeps his injuries in the closet, along with the skeletons and Wimbledon jackets of yesteryears, unwilling to reveal any physiological weaknesses unless he has to.

So when Federer asked for the trainer a few games into his fourth round match against Xavier Malisse, the gravity of the situation was written on the faces of Anaconda & Co, who watched on in concern, shivering and miserable from the Federer box. 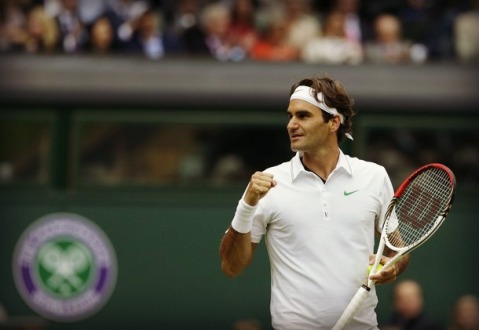 Meanwhile, Maria Sharapova was struggling against the White Lightning on grass known as Sabine Lisicki, and Serena Williams was looking ominously like she was about to join Rafael Nadal in Majorca in the third set against Shvedova.

In other words, my carefully constructed universe was under assault on all fronts and FALLING. APART. Before my very own eyes.

But in the time it took for an ad break, Federer sashayed out on court again to a half standing ovation. The Wimbledon crowd, probably the least bipartisan of the grand slams, knew a genuine injury when they see one.

But X-Man will always be X-Man: the tennis gods had gifted Xavier with all the tools to succeed on grass, save for one thing – a brain. Up a break in both the first and fourth sets, Malisse would give the break back to Federer without a hint of hesitation, framing forehands, slipping on grass and retreating to conservatism whenever he was ahead.

Not to take credit away from Federer, whose adaptability to changing conditions can be at times non-existent, and at times astounding. Troubled by his lower back, the wind, rain, and a streaky opponent, Federer went past his Plan A and B, straight to Plan Z for survival.

In the next 2 sets, he would shorten his backswing, take pace off his forehand, and opt for better placement over explosiveness. In doing so, he gave Malisse enough opportunities to implode and himself a chance to regain control of the match.

Post match, Federer would downplay the injury in front of the press.

Q.  Can you describe why you called for a trainer, what was going wrong at that point.

ROGER FEDERER:  Yeah, I mean, I felt the back going the beginning of the first set, and then I played on it maybe three, four games.  I asked for the trainer, the doctor to come out to just talk about it.  So I decided to have treatment inside.

Yeah, I guess it must be a mix of maybe from the five‑setter and the two days off and the cold wind today.  So I guess it was unlucky in this regard.  Fortunately I pulled out the match the way I did today.

Q.  How is it feeling right now?

ROGER FEDERER:  Okay.  I mean, way better than a few hours ago, so that’s pretty good.  But honestly I’m not too worried.  I’ve had bad backs over the years.  I’ve been around.  They go as quick as they came.

But of course I have to keep an eye on it now.  I have one and a half days, which is a lot of time, to be quite honest, to work with.  Two good night’s sleeps and I’ll be 100% on Wednesday.

I’m pretty convinced, otherwise I wouldn’t have been able to pull out the match the way I did today.

Maria Sharapova on the other hand, did not have plans that went by all the letters of the alphabet. Faced with an opponent who plays a similar heavy hitting, ‘firing squad’ game as her, Sharapova responded with the only other asset she has over her opponent: tenacity.

But tenacity wasn’t enough yesterday against Lisicki, who sank to the ground – laughing, crying and basking in unadulterated joy as she served out the match with a second serve ace. 64 63.

It’s hard not to share the elation of someone who makes joy look like such a natural fact of life and sport.

Q.  I don’t think I’ve ever seen someone smile so much on a tennis court.

SABINE LISICKI:  Well, I enjoy the sport.  I just love playing tennis and I love being out there, especially at my favorite tournament.

So, you know, I just have fun out there.  I mean, I know I missed the shot by a little, but I was going for the right one, so there’s nothing to be mad about.

Maria Sharapova on the other hand was ‘colm’ in defeat, conceding that she had lost to a very talented player, and that the depth in tennis meant that no player could be underestimated.

Q.  Last week with Nadal’s loss there was plenty of discussion on the depth on the men’s tour where on any day any top 100 player could beat one of the best.  What are your thoughts on the lessons about the depth on the women’s tour?

MARIA SHARAPOVA:  Well, I don’t think it’s a lesson really for the players.  I think it’s a lesson more for the storylines.  We never really underestimate any opponents, and that’s the reason why ‑‑ if people are going to be considered favorites in matchups and tournaments, obviously everyone’s job here is to have those storylines.

At the end of the day, the reason we start at the first round is you have to go through all those opponents to get to the final stage of a tournament, whether it’s a Grand Slam or the middle of nowhere.  That’s the reason we go out and play.

It could be the No. 1 seed against someone that’s, you know, come out of the woods.  It doesn’t matter, you still have to go and play and win.

On any given day, of course there can be an upset.  That’s the sport.  That’s why we watch.

That indeed, is why we watch.