Before London 2012, and perhaps Beijing 2008, tennis at the Olympics was a blip on the radar. Although taking part as an original sport from 1896 to 1924, it didn’t make it’s modern comeback till Seoul in 1988. But compared to the slams, or even the masters, no one gave a flying rats ass what happened in the Olympics, until now (although seemingly Philipp Kohlschreiber still didn’t manage to get the memo)

In my opinion the importance of tennis at London 2012 is an anomaly, because of these factors:

The tournament itself cannot be separated from these factors and I dare say, tennis, although increasing it’s significance in the Olympics, will probably in our lifetimes never be as significant again.

Since 1988, here are the men who’ve won the single olympics Gold: Mecir, Rosset, Agassi, Kafelnikov, Massu, Nadal and now Murray. It’s a mixed bag really, and reflective of it’s significance as a tournament and it’s format.

If Grand Slams are a marathon, best of 5, 7 matches over 2 weeks, then the olympic competition, 6 matches, best of 3, over 1 week is a pure sprint. An absolute shootout. And for most top men’s players who’ve honed their entire careers to peak for the Grand Slam format, Olympics format is not a great comfort. And definitely not for Federer, who arguably is one of the best grand slam players of all time. But after 3 Olympics of failing to medal in singles, there was extra pressure, because this was possibly his best and last chance…at Wimbledon, on his own FREAKING LAWN!!!

Fed had a good tournament actually, he barely made it past Falla (I never want to see that match up ever again on grass) and he admitted to been on a bit of an emotional all tourney. Benneteau was clearly injured, and there were tight spots against Isotimin, I didn’t watch the match with Isner but looking at Isner’s grass form he didn’t have the goods to match Fed anyway. So to Delpo…

This was my match of the tournament. Del potro for all intents and purposed outplayed and outrallied Fed for most of the match. But somehow Fed’s serve found it’s Sampras-groove that day. And the longer the 3rd set went on, (even after been broken to love serving for the set) I felt that he had the mental goods to take it out. But sadly the match left him no mental goods to even contest with Murray in the final.

Fed won the Silver fair and square, but Murray won the gold. In the Final Fed was clearly 1 step slower in the corners and was so braindead, he couldn’t even make the shots, let alone chose which shot to take. And the less said about those Roddickesque approaches the better.

But do we need to worry about Fed’s form in this final? Personally I think not. The final like the tournament itself was played in the shadow of the factors I outlined above, and coupled with the massive semi Fed played, I didn’t expect a win. Although the way he played was dissappointing, it wasn’t that far off the level in his RG2012 semi TBH. Shit happens and sometimes it’s just not your day. BUT HEY…upside? YOU STILL GET SPARKLE!!!!

On the doubles side, I’m going to say this now, Federinka in Beijing 2008, was an absolute fluke, it was a product of those olympics, of Stan’s form and Federer’s willpower and determination to come back with something after the shit fest that was 2008 up until then. Having watched Federinka live, I don’t even know how they managed it, cause honestly, they’re a little shite. 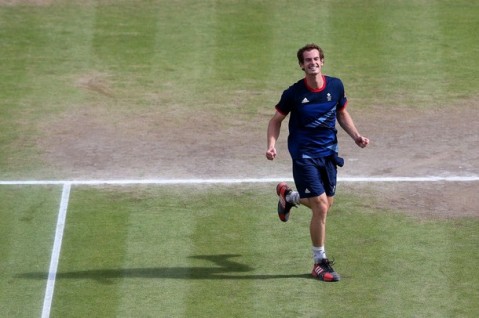 Well well well…Muzzface. The one thing which I will say here that, he should really smile more. It makes him a lot more personable. What a performance though. He was clearly the best player all tournament and bouyed by the TEAM GB juggernaut (3 golds the night before the final) he was a man on a mission. He clearly sensed Fed’s zombie shell in the final and did not let up at all. Which is perhaps testament to his newly Lendlfied mental strength. He wasn’t perfect at all times during the final but he didn’t let the foot off the pedal, which he usually does 2 sets to love against a difficult opponent.

The key here is to see whether he can take this win and implement it in grand slams. The pressure will be different and he’ll have to make it through the 1st week first, but he is getting closer.

What a BAMF. Serena just absolutely steamrolled through singles and doubles with sis Vee. She lost a total of 17 games and dealt shambolic beatdowns to the current top 2 players. State of the WTA? No, more like when Serena is ON, she’s unbeatable, especially on grass. I won’t enter the GOAT debate because hello Steffi, but Serena is definitely up there, and I never doubted that. 4 Olympic golds now…take a bow gurl!

It’s interesting to see the rising importance of Tennis at the Olympics, one big reason is because the current crop of top players really care. But for me, Tennis at the Olympics is still a temporal anomaly. Perhaps no longer a blip on the Radar (it’s more of a small tidal wave now), I feel that in the end the it’s still all about who can make that 1 week sprint every 4 years. It takes a bit of luck, support, confidence and determination.

Andy Murray had that in spades and deserved to win at London 2012. The next thing is whether Murray can take this result and propel him to his first Slam. But Olympics results can only embelish a career, not define it.

As for Fed, he is proud of his Silver, I’m proud of his Silver and we all should be to. He came to the Olympics determined to get a singles medal. Gold would have been a bonus but I gather long after he’s retired he’ll look back and think his Silver was pretty damn special. We Fed fans are a greedy lot but a Wimby title, World No 1 and an Olympic Singles Silver is a pretty awesome result for an almost 31yr old gramps for the summer. If you offered me those riches at the start of the year I would have said HELLS YEAH!!!!

Onwards and upwards…Mixed Dubs for Rio 2016? We can only hope…

Haterz to the left….