The Monday After Wrap #2

If a tree falls in a forest and no one is around to hear it, does it make a sound?

If the Rogers Cup happened and no one was there to see it, DID ANYONE ACTUALLY WIN?

Excuse the cheeky question. Starting a new job, taking new courses and working on legal admission has sapped me of all my free time and energy lately. And with the Olympics dominating my sports agenda for the past few weeks, it seems that I’ve blinked and almost missed the so-called US Open Series entirely.

Luckily, I’ve managed to catch a bit of my favourite tournament of the Series – Cincinnati, which has an endearing quality of being just a little daggy and utterly without pretention. Even the winners’ trophies look like they’ve been donated by the Senior Citizen’s Association of Oh-Hai-Yo.

Of the few Cincinnati matches I did watch, I saw a Federer looking mentally focused and playing with house money. I used to laugh whenever commentators talked about Federer being a “great frontrunner” – as if the man has never choked away a 2 set lead, lost a couple of early breaks to concede a set, or gone on a customary trip to Mirkaland in his career. But in one sense, the man is truly a front runner: he’s better than anyone at getting to World No 1, consolidating his position, and staying there for a respectable period of time.

Within one week, McFed managed to 1) win his 21st Masters title of the year, and 3rd of 2012, 2) make Cincinnati the 7th tournament that he has won 5 times, and 3) take the top spot out of contest for the US Open by consolidating a 900 point lead over Djokovic in the rankings. And he did so by going on a rampage, not dropping a single set in 5 matches, and refusing to lose serve for an entire tournament.

Calm the fuck down man, save some awesomesauce for the US Open.

A feat he’s only managed to achieve twice before in his career. I’ve always liked words more than numbers, but as always, Federer proves to be the exception to the rule: I derive an unhealthy level of smugness and satisfaction from crunching on Federer’s stats whenever he breaks a new record (which happens to be everyday). Must be nice to be a living, breathing, walking, winning exception to every rule. 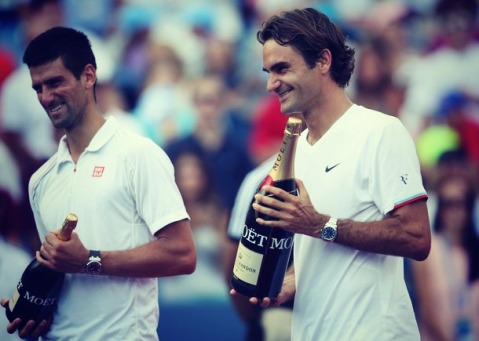 For a match up between the No 1 and 2 player in the world, the final hardly lived up to its billing. Federer was in his post-modern state of mind, as he methodically deconstructed Satan’s game (with a lot of help from Satan himself) in 20 minutes all the while dominating on his own serve.

“2006 level Federer!” proclaimed the Twattter excitedly as Federer wrapped up his first ever bagel against Djokovic with some Swiss cheese.

The problem was that 06 Federer was also playing the less-than-stellar 06 Djokovic.

What was more impressive however was the way Federer held off a resurgent Djokovic in the second set, much like how he held off Mardy Fish two rounds prior (although ironically, that was the more thrilling match).

Midway through the second set, Djokovic’s unrelenting hardcourt defence was in full flight, and the possibility of a third set started to gain momentum. As the set went into a tiebreak, Federer took an early 3-0 lead. Djokovic fought back, taking the scoreline back to 4-3 and proving momentum to be a fickle bitch. Djokovic would go on to save a match point at 6-5 with a satanic forehand down the line. But when the time came for a set point of his own, Djokovic missed his chance with a whimpy lob that sailed weakly towards the sun, singeing the eyeballs of those who dared to look and see that it was met with a Federer smash.

2 points later, Federer would lift his arms up in the air in victory.

There’s always a lot of discussions post tournament about what it all means, as if tennis tournaments were ever meant to mean something. In the greater scheme of the US Open, Cincinnati doesn’t mean a whole lot.

It told us that Djokovic, who won in Toronto (if that tournament happened at all), is in good form: which we already knew.

It suggested that Federer, having lost only 7 matches since US Open last year, is one of the favourites among many for the last slam of the year. A fact we also already knew.

Cincinnati showed that Nostrils still remains unproven, and that Wawrinka is a minion, albeit a dangerous one. It showed that Roddick struggling with inconsistency, and that Farty Dish is probably still America’s best hope for grand slam glory, which happens to equate to no hope at all.

In short, it didn’t tell us anything we didn’t already know.

And so we head to the US Open, Roger and Novak as the clear favourites, Rafa’s knees sadly out of sight. Andy Murray feeling just a little more hopeful than usual this time. And perhaps, just perhaps, someone somewhere is looking at that gaping hole Nadal left in the draw and thinking we might just get a surprise finalist this time round.