Another one of the Grandpa Generation is off to the sunset after US Open – for Andy Roddick is hanging up his racquets after US Open.

There’s no way any decent tennis fan would have missed the announcement that one of the most colourful (if not exactly the most agreeable) personalities of the tour is retiring. With him meeting one of the stars of the Generation After Nadal-Djokovic-Murray, Bernie Tomic – it was supposed to be the marquee match of the US Open thus far. Fair to say some expected Bratomic to end the career of A-Rod. After all, he’s 11 years younger (on paper anyway ;)), supposedly stronger and faster, nearing the peak of his game whilst Roddick is on his swan song.

Arthur Ashe was packed to the capacity for that match, nearing the crowds of a final even. If Roddick was to go out, he would go out with a bang and in front of thousands of Americans.

But Roddick was not done yet.

From the word play, it was Roddick’s match. He started the match well, and was never even remotely threatened, serving spectacularly and dictating play. The Brat has never played on Ashe – although he would be accustomed to Centre Court courts from Australian Open – and his nerves and inexperience showed. Fumbling and tumbling and double-faulting, he lost the first set 6-3. Tomic began playing better in the second set, matching Rod well until a lapse late in the second set allowed Old Man Rod to capitalise, pounce on a break and then serve out the set.

And then the role reversal began. Suddenly, it was Roddick who had a spring to his step. He was the one that bounded and scrambled across the court as if the clock had dialled back ten years. Brat, on the other hand, had his head hung low, clearly overwhelmed and unable to muster any kind of fighting spirit. His steps were slow and heavy, his shots misfiring, and if you were sitting on the last row on Ashe where the players looked undiscernible and ant-like, you would have thought Tomic was the old man on the verge of retiring.

Up 5-0 and serving for the match, Rod banged down an ace in classic A-Rod style and claimed the victory. With age, comes experience, and that has prevailed in that match. He will play Fab Fog next and will again face with that whole hoopala of his “last professional match ever” and his emotions may be playing tricks. Still, I believe, the next match will not be his last. 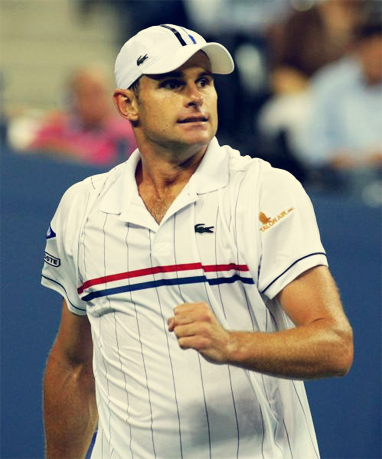 As for Tomic…what else is there to say? Again, his lack of heart and lack of fight was displayed and bared all on the courts of Arthur Ashe today. The saying does 1% genius and 99% hard work and determination. Tomic will never make anything out his career if he carries on thinking he’s the bees’ knees, the cats’ pajamas and all that.

Yanno, I was thinking to wax lyrical about Roddick’s impending retirement, but seeing he’s not done yet, I won’t go all wibbly and stuff about it…but for someone who basically wouldn’t really call herself a Roddick fan, I have way more emotions about this than I ever expected to have. It’s kinda weird. I find Roddick entertaining but his game never excites me and his on-court behaviour is frat-boy level immature and annoying.

But then again, I have many feels about the dudes in the Old Folks’ Generation, so…

As for the other gentlemen and the ladies – Djokovic sailed through his match with minimal difficulty, as did Vika Azarenka and Shrieky. However, my favourite women’s headcase Li Na was ousted by Laura Robson – a result that had me very frowny faced indeed. I was told that Robson was brilliant as opposed to Li Na imploding ala Li Na but still…it makes me sad.

The match of the Batshit Crazy People between Baggy and Dolgo lived up to its billing. The match has everything – implosions, crazy shots, bagel, failure to serve out sets and see-sawing drama in the fourth-set tiebreaker. Baggy served for the fourth set twice (to push the match into the fifth), broken both times, was up 5-4 in the tiebreaker with a mini break, and somehow just managed to lose it. Crazy meets My Friend Stanley in his next match, and I’m on Team Crazy all the way. Now watch him lose to Stanley.

A special mention to Ernie Gulbis, who clawed back from 2 sets to love down to beat my darling Tommy Haas, and then lost Steve Johnson. Dude, if you’re going to lose to Steve Johnson, then don’t beat Haas (also I don’t even know who is Steve Johnson).

And onward to Day 6 (and Federer, please make your match simple).