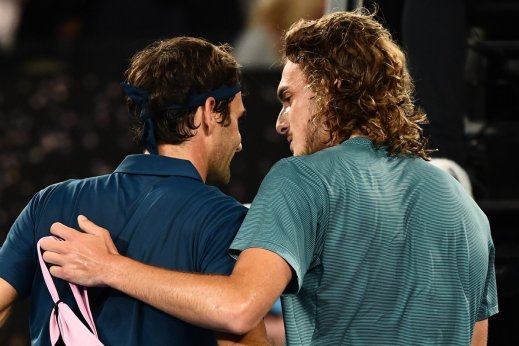 You’re here because he lost. In the most frustrating manner possible. After two amazing years, Federer leaves Melbourne in 2019 on the wrong Sunday. And here I am, tapping away as a therapeutic exercise. May you also find comfort, or at least food for thought, in these words.

It was the kind of match where he couldn’t convert breakpoints on second serves, couldn’t find the court on his passing shots, couldn’t find his forehand when it mattered, couldn’t win ugly, even when there were moments of the kind of beauty we’ve grown accustomed to seeing – no demanding – from him.

Tsitsipas is a huge young talent with the combination of explosiveness and shotmaking that might just keep me interested in tennis when Federer finally decides to call it quits. I can live with Tsitsipas winning. What I am disappointed about is the utterly dissatisfying way Federer lost.

I woke up this morning thinking about two matches, both of which made me nervous about what was to come. The first match was the Sampras/Federer 4th round match at Wimbledon 2001. The parallels between that match and this one have been well discussed, but it was enough to make me nervous. Was Tsitsipas really going to be the Federer to Federer’s Sampras? I comforted myself with the knowledge that despite the comparisons, Federer has far surpassed Sampras as a player, as a statesman of the game, and generally as an athlete who has handled ageing with the kind of ease, ambition and dignity rarely seen in sport. In the immediate aftermath of his loss, I still believe this to be true.

The second match I thought about today was the Federer/Soderling quarterfinal at Roland Garros 2010, not that it was a parallel with this match today. Soderling was no newcomer, and Federer had won the opening set convincingly in that quarterfinal, before being clobbered off the court in the next 3 sets. It was the match that snapped his consecutive semifinals streak. Remembering this match today, I almost laughed at how  dejected and heartbroken I felt at the time. I stopped writing, tweeting, and generally thinking about tennis for weeks. And now, almost 9 years later, few people remember or talk about that loss.

So perhaps in remembering these two matches when I woke up this morning, my subconscious mind had suspected that Federer might lose today, and then given me the tools to cope with the loss.

So here is what I have learned in the last 9 years about handling losses, even if they were losses you vicariously lived through.

Who’s actually excited about clay for once?

3 responses to “Afterthoughts (a.k.a therapy)”