The psychology of sports forms the basis for a brief commentary on the evolving Roland Garros tournament, currently lodged between the second and third rounds at the end of Wednesday’s play in Paris. The events of the past two days have enabled tennis observers to appreciate the inner game of the sport, the test between the ears that gives rise to such engrossing drama even when the raw level of play leaves something to be desired.

Plenty of coaches and sports psychologists have drawn from Timothy Gallwey’s seminal 1974 book, The Inner Game of Tennis, to impart to athletes the importance of acquiring the right frame of mind. It is obvious that the mind matters so much in tennis, a solo-flyer sport that demands the ability to handle a lot of loneliness. At the majors, the women don’t receive coaching during changeovers; every match at a major – for the men and the women – is a true test of the individual’s ability to solve problems on the fly.

Yet, for all the ways in which the primacy of mental toughness is so evident at a major, there’s one specific way in which the mind can get overlooked.

Yes, it’s important to be able to fight back when trailing, to persevere when things aren’t going your way. Yes, it’s important to be able to hit a clutch serve when facing a break-and-set point at 30-40, 4-5, in the third set of a match that is tied at one set apiece. Yes, it is important to deliver the goods at 5-all in a tiebreaker or at deuce in the 12th game of a set. However, those situations – as important as they are – don’t quite fit into the one situation that trips up so many players: Arriving at a midpoint in a set or tiebreaker when everything is going right and a once-unlikely victory becomes possible.

If you study a major tennis tournament closely enough, you’ll quickly realize how often this specific problem ambushes so many talented tennis professionals. Ernests Gulbis led Gael Monfils 3-2 in the second set in Wednesday’s featured second-round match at Court Philippe Chatrier. Gulbis busted out his best and most untouchable heaven-kissed tennis to break for a 3-2 lead, having already taken the first set in a tiebreaker. The flow of the match was headed in Gulbis’s direction.

Gulbis promptly lost serve for 3-all, and then donated a bunch of errors when serving at 4-5 to hand Monfils the second set, 6-4. The third set was glorious, but when Monfils got a lucky get-out-of-jail net cord to survive a break point at 5-all, he rode that bit of fortune to a tiebreaker win and a four-set triumph a short time later.

Understand this about Gulbis: He loses so many matches not merely in exasperating fashion, but after taking the first set. Gulbis can oh-so-easily find an exalted level of tennis, but his career has been such a study in underachievement precisely because Gulbis can’t stay on the mountain very long. It is a mental skill, not just a physical one, to remain locked in — no, not to the point where you hit ridiculous winners again and again, but to the point that consistency becomes built into performance so that the muscle memory becomes reliable.

Gulbis is perhaps the most prominent example on the ATP side of a gifted tennis player who allows himself to think about how well he’s doing… which opens the gateway for doubt to creep in as soon as a bad shot flies off the racquet. Svetlana Kuznetsova is the prime example of this dynamic on the WTA Tour. When a player should be relishing the ability to play well, the Gulbises and Kuznetsovas worry when it’s all going to fall apart — not consciously, but subconsciously, and certainly enough to hijack peak performance.

Another example of this counterintuitive dynamic — playing well until leading, when the prospect of victory becomes too much to bear — was in evidence in Wednesday’s second-round match between Roger Federer’s next Roland Garros opponent, Julien Benneteau, and Tobias Kamke. Benneteau, who – remember – has not won an ATP singles title in his career, led by two sets against an inferior opponent. The thought of winning (not losing) paralyzed the Frenchman, who proceeded to drop 10 straight games and fall behind 2-0 in the fifth. The fear of success, not the fear of failure, is the overlooked dimension of frailty in professional tennis, and Benneteau succumbed to it.

Fortunately for him, so did Kamke.

The German had little reason to believe for most of the match that victory was likely his. After his third-set escape, he had a right to expect a fifth set, but it was only at 2-0 in the fifth that the finish line appeared.

It’s not as though the end of this match was dramatic. Benneteau held at love when serving for the match at 5-4. The end came not with a bang, but a whimper. It was at 2-0 in the fifth when Kamke lost hold of the proceedings. He lost this match in the early and middle stages of a set, not its endpoint. Gulbis, when blowing the 3-2 break lead in the second set – following one of his best stretches of performance in the match – gave Monfils the opening the Frenchman needed.

Head games are such a central part of tennis. “Ahead games” — at 3-2 or 2-0 in a set — show why those head games matter so much. Life seems too good to be true for a great number of tennis players only because they fear success too much.

The day started off with 2 unfortunate retirements… Feli  (Pulled muscle) and Dancevic (Lower back)…and with that the Roland Garros 2012 casualty list was off to a great start. 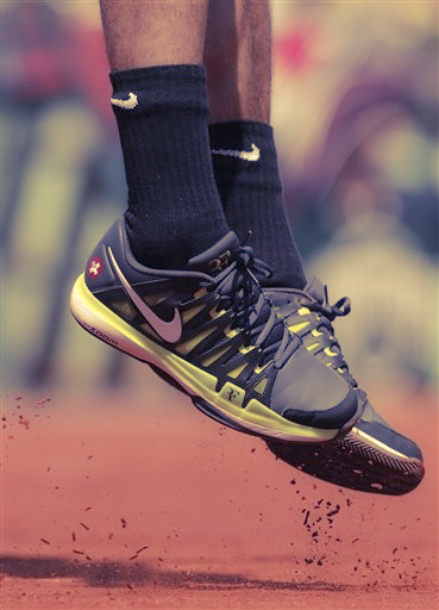 Princess finally made a decision on what colour socks to wear..Black it was…

Our wonder boy Wogie McFudd was second out on Suzanne Lenglen…up against German Tobias Kamke. I missed the first half of the match due to mandatory nommage of birthday cake bought for Dad, but the last half which I did see consisted of: