I have seen the FUTURE, bitches, and holy hell, the future looks exactly the same. 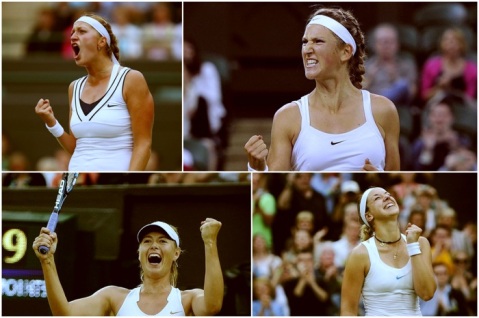 Excuse the appearance based over-generalisation. Anyone with a decent knowledge of women’s tennis would understand that the randomized shotmaking of Kvitova, the mobility and precision of Vika, the pitbull presence of Sharapova and the simple formula of BOOM-BOOM make these 4 ladies all different and individual in their on-court presence.

Whereas the French Open in the last few years has served up a kaleidoscope of players in its latter stages, Wimbledon continues to be the slam dominated by a single narrative. Wimbledon 2011 post-Williams dynasty has left women’s tennis with a quartet of grunting, walloping, fist-pumping, big babe, blond ladyballers between whom 90% of the general public cannot differentiate.

Don’t get me wrong – I like each of these players individually, I can’t help but wish that Week 2 of arguably the most inaccessible, uppity slam of all hasn’t presented us with so homogenous and alike a crowd of remaining contenders.

The unlikely breath of fresh air and – dare I say – the hero of the vaginal draw came in the form of Marion Bartoli. But it was only inevitable that Bart’s emotionally charged run into the quarterfinals, including 2 three-setters in the first week and the defeat of Serena Williams (still the ultimate champion and benchmark in women’s tennis) could only come to an exhausting end.

I’ve had an uneasy relationship with the Hamster, partly because she has the personality of a prickly pear, and partly because she seems to specialise in upsetting my ladyballer favourites just as I get emotionally invested in their performance at a tournament.

And in case you haven’t noticed, I’m nothing but a proudly sore loser.

But there is a certain intrigue to Marion Bartoli – her brutal honesty and lack of diplomacy in the media, the fact that she doesn’t give a fuck about what anyone thinks, her mindboggling and redundant service motion, the imaginative yet utterly unimaginable angles she produces … in a way, Bartoli is the ultimate “anti-big babe”. And if the way she conducted herself over the course of the last two weeks – especially after her win over Serena – is anything to go by, the Hamster is maturing into a calm, courageous and classy young woman.

One response to “Homogeneity.”