Doots: The women’s tour has been dominated this year by Sharapova and Azarenka. We’re literally looking at a Big 2 situation – with Serena occasionally popping up on the radar because she’s that awesome.

LJ: but it’s clay, I think therein lies the problem.

PJ: I guess for me, I feel like it’s “open” in the sense that there are no sure favourites despite domination from Azarenka and Shrieky. Not like how Rafa is for the men’s.

Doots: Well, I still don’t know. Sharapova has had her best results this year on clay: Rome, Stuttgart, and lost to Serena by the same scoreline as Vika in Madrid. She comes into Roland Garros with by far the best clay season record of the women, which is incredible considering how bad she was on this surface a few years ago.

PJ: That is true. I was rather impressed with Sharapova’s clay showing this year. I know clay isn’t her forte but going by recent form and results, I’ll peg her as one of the favourites. Historical showing otherwise.

LJ: I think Shrieky, Azarenka and Serena for me, but hey if previous results are to be followed, it’ll be a crapshoot for the win.

Doots: They do tend to be the “Big 3” these days, which was precisely my previous point – it’s not as open as in previous years where you just knew that Wozniacki or Jankovic or whoever was up at the top couldn’t do it. But looking at the draw quarters again – 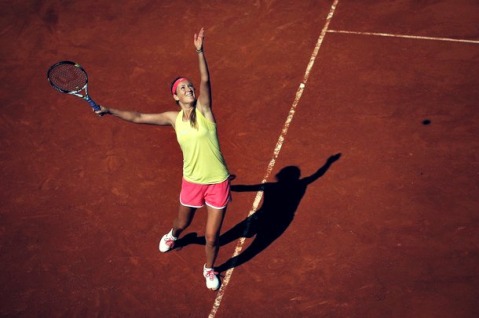 Azarenka: She’s got “Our Sam“, or possibly Lisicki, Cibulkova in the 16th. Vika also has Brianti first round, which I totally expect her to come through easy-peasy. But I always have a soft spot for Brianti, especially on clay, because she makes me miss Justine Henin a lot.

PJ: Azarenka isn’t as nuts as she used to be. Petrova or Cibulkova won’t really trouble her.

LJ: I don’t think anyone will trouble Azarenka, but Petrova/Lisicki might prove troublesome for Sammy.

Doots: Sam has Baltacha first round. Not a terribly tough one, but she still has to be alert and on from the first match.

PJ: Sam probably used up all the quota for sanity and serenity in her brain with the US Open win. Whilst I’ll happily take that, I wish she could just power through a little bit more.

Doots: The good thing with having Lisicki and Petrova as potential threats is that both those players are better on grass, whereas Sam’s game is more of a natural fit on clay. Unless she has a sudden brain cramp, I’d expect her to go through to the quarters at least.

PJ: But Sam does have the propensity to brain cramp, see Aus Open against Ivanovic #2 this year. That being said I do expect her to make quarters, but if she’s upset by Petrova I wouldn’t be completely surprised.

LJ: but do you think she’s got more confidence on clay? Because she finds better timing on her shots?

Doots: you mean Sam? I think Sam isn’t an instinctive or intuitive player, much like Verdasco. So clay gives her better timing on her shots, she moves on better on it too. And it suits her serve more.

PJ: Sam needs to focus on getting the job done and forget about the pressure and all the other white noise. I agree with you guys, she has a very good game on clay. If she executes it well…I wouldn’t be surprised if she beats Azarenka. But with Sam, it’s either this or that, if you get what I mean. 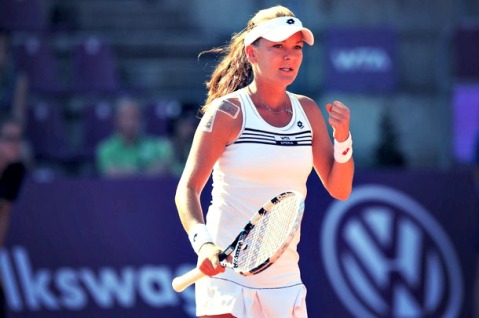 Doots: And Radwanska’s quarter – I gotta say I groaned when I saw ARad against Venus second round. Results-wise this is the most unpredictable quarter – Ivanovic, Bartoli, Pennetta, Kerber. A lot of dark horses and Radwanska isn’t who you’d put money on to make semis, as consistent as she is these days.

LJ: Seriously, Ivanovic, Kuzzy, Venus AND Radwanska ALL BEFORE THE 4TH ROUND? Fark.

PJ: Radwanska – to me – is a slightly more creative Wozniacki. I mean she at least knows how to win a point, but a huge chunk of her game seems to be run and retrieve. Which – yanno – works well on clay.

Doots: She’s more of an all court player than Woz, and not being a Powerpuff Girl makes her use her other assets – like timing, shotmaking and movement – more to win. I’m actually very impressed she’s made it all the way to Top 3.

LJ:  I expect Bartoli to make it to the quarters from her bit.

Doots:  You never know with French people playing in France.

PJ:  If it’s a tussle between Hamster and ARad … I’m giving the edge to Bartoli. The one person I really hope for to make semis…is Kuznetsova. But she won’t.

Doots:  Personally I’d watch out for Angelique Kerber. Since when is she No 10? Not to mention she pulled some strong results in Rome, and has been on a sneaky rise since the start of the year.

PJ:  Kerber? Good run at US Open, plus consistent results at smaller tourneys and Premiers, it’s been building.

PJ:  Would you pick her to upset Bartoli, though?

Doots:  Probably. “Watch this space” is all I’m saying. I think Kerber may have some quarters and semis in her this year at the big tournaments. 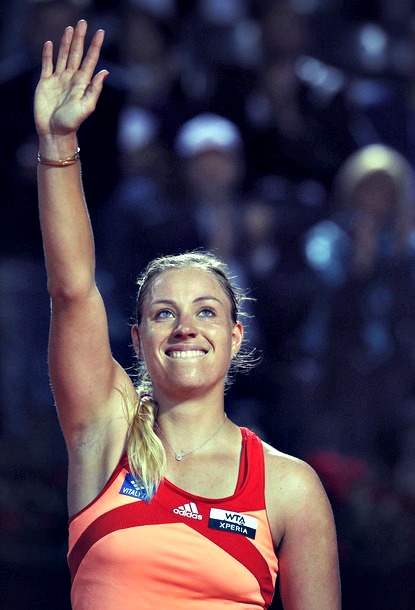 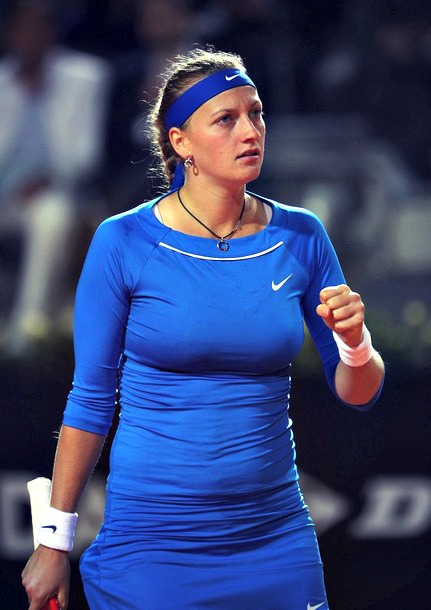 NEXT! Kvitova’s quarter: notice how irrelevant Kvits has become this year? Not to mention as I understand – she’s had some abdominal issues recently, another draw where you’d expect some upsets.

PJ:  Dude. I KNOW. I like Kvits. I really like her. But SUCH a complete headcase. Based on current physical issues and mental capacity – I am inclined to say Kvits won’t make it to quarters but then, the likelihood of her winning RG is similar to the likelihood of her losing to Ashleigh Barty.

Doots:  She’s done it last year, so why not? I don’t see her winning the tournament, but I do see her making the semis from this quarter, because this is – to put it bluntly – the quarter of Has-Beens: Jankovic, Zvonareva, Schiavone … (sob)

PJ:  Li Na has to watch out for Cirstea first round.

Doots:  You mean, I have to watch out for being fistpumped into depression by Cirstea if I wanted to watch Li Na’s first match? FML. But my favourite first round match of all here is Schiavone and Date Krumm. How old school is that? I think I might watch it with my knitting needles ready for the occasion.

PJ:  I seriously hope there will be a stream for that. I want to see that. As y’all know, I am so Camp Old People. 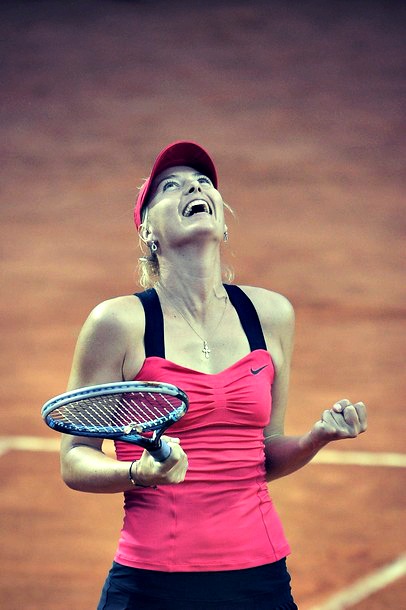 LJ:  LOLTASTIC. I always find there’s one quarter in all the slams for the women that just makes you go “WTF TENNIS GODS? WTF???”

Doots:  Sharapova could be No 1 and the proud owner of a complete set of slams, but instead, she’s got Serena and Woniacki in her section. Not to mention – there are the mini Steffis – Goerges and Hradecka.

PJ:  Wozniacki can easily run her down into making errors galore especially if she’s having a bad serving day. But Shrieky faces Serena OR Woz.

Doots:  Yes, true. Serena’s got a few demons here herself – she has oddly had problems with Wozniacki this year, and anyone remember Aravene Rezai? I’d love to see her bitchy game (and personality) back in the spotlight some time.

LJ:  Shreiky should make quarters, I can’t see anyone in her half-quarter to trouble her, but I’d say it’s 50/50 with Woz and Serena.

PJ:  Hmmm. I see Kirilenko. The possibility of her beating Shrieky isn’t great but …

LJ:  nah, Kirilenko won’t have it in her.

Doots: Kirilenko would’ve had a chance against Maria 2 years ago, less so last year, and not much this year, unless Sharapova has a very off day. And let’s face it – Sharapova hasn’t had a lot of off days in 2012, at least not against anyone of Kirilenko’s calibre.

Doots:  I’m going with Toomuch for Aussie men. Mainly because Lleyton has no chance in hell of making it out the second round.

LJ:  Hewitt/Tomic for a tie

Doots:  oh shit – forgot he existed. THE DYING HOPES OF AUSTRALIAN TENNIS REST ON HIS SHOULDERS.

Doots:  And last but not least – the last Frenchperson standing?

Doots:  Aaah. I always forget about Gillay. Or I wish to anyway. Tsonga for men’s. Bartoli or Alize Cornet (finalist in Strasbourg this week) for women’s?

PJ: have we decided on who will be this year’s Robin Soderling yet?

Doots:  I think Tipsy might’ve had his Yoker Moment in Madrid against Djoko. The Schiavone of 2012 then?

Doots:  How fabulous would either of that be!

3 responses to “Roland Garros Preview: A Conference of Anti-Experts. Pt 2”