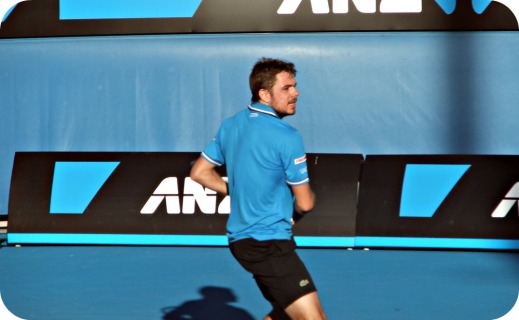 A bit of a catch-up post, because I’ve been mindfuckedly busy this week I haven’t had time for “Fence Maintenance”.

1. I’ve never seen a killer in Stanislas Wawrinka until this week. Maybe it was the double chin, or the neck beard that makes him slightly resemble Ewok. Or the fact that he had always been “the other Swiss”, the guy that Woger once made a campfire out of, quiet and slightly “Fat Dave”-like in his build.

And I’m not sure why I see it now either: I’d like to say that it has nothing to do with the going-ons in his personal life (his recent separation from his wife and child), but at the end of the day, it has. There is a kind of ruthlessness in Stan’s character that I hadn’t realised before, and he’s certainly playing with a sense of ruthlessness, yet to lose a match this year, or even a set this tournament.

Watching him against Dimitrov (live) and Monfils (on telly), it struck me that Stan Not-So-Man is a bit of an anti-Gasquet. Whereas Gasquet came into the game being hailed as “Baby Fed”, with the high expectations of his country riding on his young talented shoulders, Wawrinka floated under the radar for years as the shadow of Federer, “that-other-Swiss-guy-that’s-not-the-One”. Whereas Gasquet’s in his comfort zone when he rallies from a full meter behind the baseline (is Reesh the only guy who actually takes a step back when he receives serve?), Not-So-Man is more Federersque in his attitude, with perhaps even more aggressive shot-making than Federer. (Lundgren’s work?)

All this is a rather long-winded way of saying that I’m not so sure about that projected Federer v Roddick quarterfinal. And Stan is a quarterfinal opponent I’d worry about far more than Roddick.

2. Grigor Dimitrov. Is he legal? ‘Cause like … a friend wanted to know.

3. Mentioning Dimitrov, Stan and Gasquet: we can make a pact that we NEVER call any dark-haired boy with a single-handed backhand “Baby Fed”, ever again?

Perhaps one day, a young boy will come along who can hit a forehand like this, and then it won’t matter if he has a single handed backhand, or has Lundgren as a coach. It just won’t matter. Until then, I think we can do more justice to both Federer and his baby counterparts by not comparing them falsely.

4. I watched most of the completely bizarre match played by Wogie McFed on Rod Laver Arena yesterday. He was agitated for most of the second and third set, groaning at his errors, screaming “c’mons”, fist pumping a point at 15-all like his name was Ana Fistpumpovic.

There was a period where he went through a fixation with drop shots, as if to say “Imma gonna keep playin’ this until I kick yo ass wit it“. He didn’t manage to kick Malisse’s ass: X-Man’s movement was fairly spectacular. Yet despite all of Wogie’s frustrations and annoyance, he won easily 63 63 61, and kicked up the charm in his post-match on-court interview with Jim Courier.

It’s one of my favourite things about Federer in Australia. He seems so relaxed, so at ease with Jim Courier and Todd Woodbridge that a completely human side of him comes out. When asked about his mindet in the fifth set against Simon on Wednesday,  Federer drew rounds of laughter from the crowd as he half-jokingly answered: “I hope Gilles doesn’t play so well … I hope he gets tired … because then plays Sydney, then he comes here and badly prepared …”

And when Woody asked him about the 4 Swiss flags on the side of his shoes, McFed protested like a little girl, “but it’s gonna sound cocky mum, you’re making me sound cocky…” and with that, he had the crowd wrapped around his little finger. One moment, the 16 time enslammed champion, next – just a curly-haired man worried about sounding too up himself.

5. This has to be a first – Tony Godsick gives an interview about Federer to a Swiss paper (in French). Interesting last question: “Why did it take so long for Federer to impose his presence in the United States?”

9 responses to “Aus Open Days 3-5: Ewok and Other Passing Thoughts”