Each year, Indian Wells proves to be one of the least fruitful tournaments for the doubles specialists of the game. There you are, wrapped in your own little bubble, ranked No 3 in the world and no doubt feeling rather doozy about the size of your balls … until the richest man in tennis sashays in with his Ewok-looking minion and flicks you out of the tournament in 49 minutes.

BOOM. You are hit with the realisation that your balls will never be as big as the size of McFed’s ego and TALENT. Life’s tough, ain’t it? 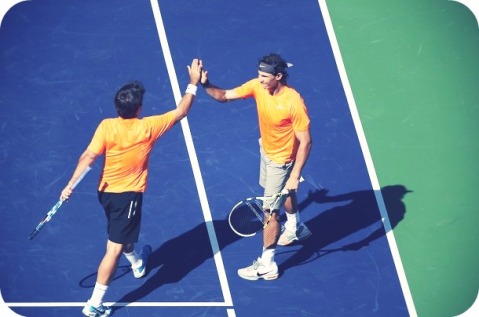 All that was a long winded way of saying that Federer, Nadal, Djokovic and Murray all came through their first round doubles match today. In fact, the only top 10 player who isn’t playing doubles this week in Indian Wells happens to one gentleman named Andy Roddick. With this strong a field, it might be slim pickings for the actual “doubles specialists” who do this on a day in, day out basis.

While we’re on the topic of Wogie McArsserer, dude has announced today that he will play Monte Carlo this year, after skipping the tournament in 2010. It’s a good call, as he will be defending close to nothing for the next 4 tournaments and could in fact consolidate a strong position in the rankings before the Roland Garros-Wimbledon bonanza rolls around.

But his Indian Wells campaign is due to be off to a rather uncertain start – Wogie faces Igor Andreev, the-right-handed-Nadal-but-shit second round. The last two matches he has played against Andreev at the US Open 2008 and Australian Open 2010 both caused my stomach acid to burn all the way through to my ovaries. FRACKITY FRACKING FUDGEBALLS!

Careful dude, you might be in doubles for longer than in singles.

In singles tennis, it was as tough day for the Aussies, as Not-a-Fucking-Tourist played like a fucking tourist to be bundled out of the tournament by Sara Errani. Lleyton was sent packing in straight sets by Rendy Lu, 62 63, and Chris Gooch lost to wildcard James Flake (oh remember him?), 36 63 62.

Unfortunately, the aTomic remains an Aussie hope in the Indian Wells draw, due to face Victor Trotsky next round in a Clash of the Classness. I would rate this match on a scale of 1 to annoying, except the mercury might blow right through the scale.

That’s all for today. With so much tennis going on, you’d be surprised to know that there is absolutely no stream coverage of the event. Time for Indian Wells to join the 21st century, I say!